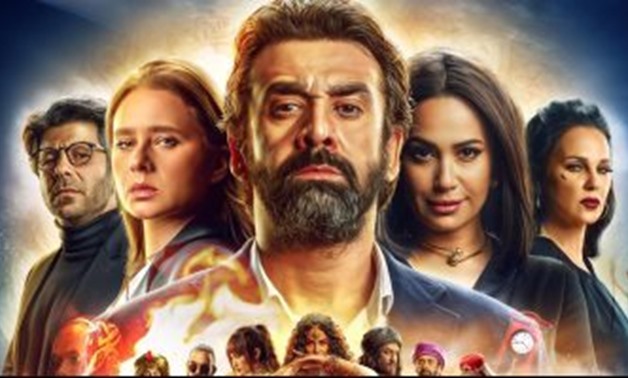 What are the 10 highest-grossing movies in the history of Egyptian cinema?

CAIRO – 8 November 2019: The Egyptian cinema is very rich with successful movies that managed to achieve great success. Egypt Today will present to its readers in this article the 10 highest-grossing movies in the history of Egyptian cinema.

In the first time in the history of Egyptian cinema, the movie “Blue ELephant P II) starring Karim Abdel Aziz exceeds the LE 100 M mark in revenues since its screening in cinemas on July 25.

Part 2 stars the same cast of the first movie, led by director Marwan Hamed and author Ahmed Mourad. Tunisian actress Hend Sabry joins the cast, along with Jordanian actor Eyad Nassar who joins as a guest of honor.

“Casablanca” achieved the highest daily income in the history of Egyptian cinema at that time, achieving LE 6,721,308 and surpassing the rest of the competing films by far; in addition to the records achieved on the level of Arab cinema revenues, as the film is being screened in Arab and Gulf theaters.

The film is the joint production of Talent Media, Synergy Films and Tahir Media Production. It is directed by Peter Mimi and written by Hisham Hilal.

The action movie revolves around Omar El-Mor (Amir Karara) and an adventure in Casablanca.
The plot tackles the life of three Alexandrian men who despite being pirates, have a touch of humanity.

The three performed nautical theft, where El-Mor was arrested but refused to inform the police about his partners, who are Oraby ( Amr Abdel Gelil) and Rasheed ( Eyad Nassar).

On the aftermath of his release he discovered that Orabi betrayed them and travelled to Morocco to start a new life there and changed his name to Haroun and kidnapped El-Mor’s brother Zakaria ( Ahmed Dash), so El-Mor and Rasheed decided to cooperate together to grab their right from Oraby and return Zakaria back.

Casablanca is a different type of action movie because it is shot across different cities such as Marrakech, Casablanca, Safaga and Alexandria, so it contains different pictures on screen that were executed with the latest cinematic techniques.

The film was screened as part of the celebrations of the 46th anniversary of 6th of October War victory.


People interacted with the patriotic movie, especially that it screened as part of the celebrations of the glorious victory of October 6.

Egyptians were keen to watch the important patriotic movie which achieved booming success.

It is worth mentioning that the Ministry of Culture represented by the Cultural Production Sector headed by veteran director Khaled Galal honoured ''El Mamar'' movie makers on Tuesday, October 29.

“El Badla”, which was released in Eid el-Adha in 2018, achieved high revenues, claiming the first rank in the Egyptian box office at that time.
Hosny plays in the movie the role of a police officer who finds himself involved in a number of critical situations due to the nature of his job.

“El Badla” was screened in Saudi Arabia starting on September 2018. It was the first Arabic movie to be screened in the kingdom’s history.

In the movie, Karim Abdel Aziz plays the role of a dentist named “Adham” who has been married for ten years. However, a huge gap develops in their marriage which forces his wife to watch her husband all the time in a comic way.

Abdel Aziz returned to cinema with this movie after a hiatus of 4 years, since the screening of "The Blue Elephant" part one in 2014.

The film takes place in the era of King Farouk, Egypt's last king. The story revolves around a police officer, Youssef el Masry (Amir Karara), who lives in the Karmooz district in Alexandria. Masry fights many battles and saves a girl from being raped in the movie.

Boyka stated that he is more than happy to participate for the first time in such a unique cinematic experience in Egypt.

The superstar further commented that both Karara and the movie’s director, Peter Mimi, are highly talented and knowledgeable and that he is pleased to work with both of them.

The world renowned star expressed his great appreciation of his Egyptian fans, especially for the love and support they gave him.

“Harb Karmouz” is the first movie that is solely starred by Amir Karara.

The movie highlights the continuous efforts exerted by security forces to combat terrorism, as well as the obstacles and the sufferings they face as a result of such tough work.

“El-Khaleya” stars besides Ezz, Samer el-Masrie, Mohamed Mamdouh and Amina Khalil. The movie script is written by Salah el-Geheny, while Tarek el-Erian wrote the story and directed the movie.

The film includes a duet song between famous singers Assala and Mahmoud Elessily. “El-Khaleya” is considered a high-budget action movie.

Amr Salah, an officer from the special operations sector in the Ministry of Interior was killed on October 20, during confrontations between police forces and terrorists in an oasis in the Western Desert.

He also participated in “El-Khaleya,” training Ezz and fellow actors on police exercises shown in the movie.

Salah also appeared in a few scenes in the film as an actor. He appeared in one scene changing clothes in the locker-room , another in a raid, the scene with the armored vehicle, as well as most of the scenes of Ezz in the camp.

Famed Egyptian star Ahmed el-Sakka in the movie will be accused of murdering a business man, so he escapes until he proves who the real killer is.

The movie which was released in 2017 broke the box office revenues in 22 days only and has maintained stable revenue by making at least LE 500,000 a night. The film surpassed its rivals at that time: El Asleyeen starring Menna Shalaby, Gawab E’tiqal starring Mohamed Ramadan, Tasbah Ala Kheir starring the famous Tamer Hosny, and Antara Ibn Ibn Ibn Ibn Shadad starring the comedian Mohamed Henedy.

"Laf we Dawaran" (Turning in circles),staring Ahmed Helmy, Donia Samir Ghanem, Jamila Awad, Sabrine, Inaam Salousa among others. The movie achieved great success at the time of its release. “Laf we Dawaran” is directed by Khaled Marei. It revolves around a young man who wants to travel abroad to start a new life there but his family is pushing strongly to let him change his mind.