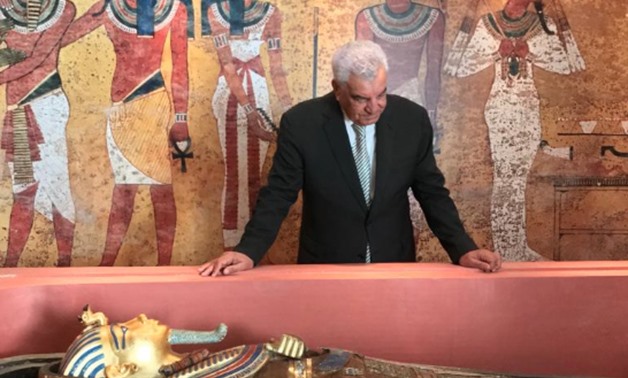 The inauguration was attended by Mayor of the city and Egyptian Commercial Advisor Mohammed al-Khatib, in addition to many of the city's cultural and political figures, and thousands of citizens.

The museum contains archeological models purchased from the workshops of the Ministry of Antiquities that reflect the story of the golden pharaoh Tutankhamun. Hawass supervised the establishment of the museum in cooperation with Italian photographer Sandroi Vanini.

The museum has models of military wheels, king's throne, cabin and canopic pots. This is in addition to many photographs and films showing the history of the monuments displayed.

Hawass announced that this museum will help revive the Brazilian tourism to Egypt, pointing out that Egypt is safe. Egyptian archaeologist Zawi Hawass during the inauguration - ET
The mayor announced that the name "King Akhenaten" was given to the most important square in the city of Curitiba, explaining that the new museum was set up by the Rosicrucian Society, which follows the footsteps of King Akhenaten and King Thutmose III. A ram road and a huge obelisk were also set up next to the museum.

On the sidelines of the opening of the museum, Hawass held an international press conference attended by many journalists. Hawass talked about the opening of the Grand Egyptian Museum and the Tutankhamun Opera which will be announced on September 12 in the presence of an Italian musician.

The veteran archaeologist had also given a lengthy interview to a local television channel.