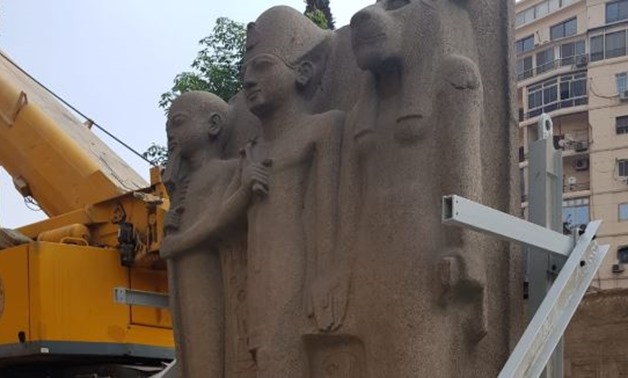 CAIRO - 25 August 2019: ET reveals a number of photos of heavy artifacts that the Ministry of Antiquities is preparing to transfer from the Egyptian Museum to the Grand Egyptian Museum.

The transfer process will be completed by the end of August in cooperation with the Arab Contractors Company.

Four pieces will be transferred to be displayed on the Great Stairs at the Grand Egyptian Museum, which is scheduled to open in 2020. All pieces are in good condition, and include the triple statue of King Ramses, Ptah, and Sekhmet, two statues of King Senusret and the top part of the obelisk of Hatshepsut.

The great staircase focuses on two themes: royal image and the gods and kings. It is divided into four sections. The first section will address how the king was represented in three-dimensional sculptures, many of which are large and impressive, while others are smaller and containing more details. The first section focuses on the Old Kingdom all the way to the Roman Era.

The second section focuses on the status of the gods, and will include representation of kings during their participation in religious rituals and tributes to the gods. This will be displayed in addition to the pillars, columns and other distinctive elements of the temples constructed for the gods as commissioned by the king. It varies between the old, middle and modern kingdoms.

Furthermore, the third section focuses on how the relationship between the king and the gods was evident through three-dimensional sculptures, triple and quadruple statues of the king and gods.

The fourth section will focus on how the ancient Egyptians preserved the king’s body after death. This section will also include royal tombs from various eras. In addition, the Memphis Cemetery will be displayed. The three royal pyramids of Giza will be visible outside the panoramic window at the top of the great staircase.

Zone one also contains two areas: Digital Information and Timetable/Records that belong to the entire museum, in addition there will be a timetable running above the eastern wall of the Great Stairs.