Aladdin: A nostalgic journey with a twist 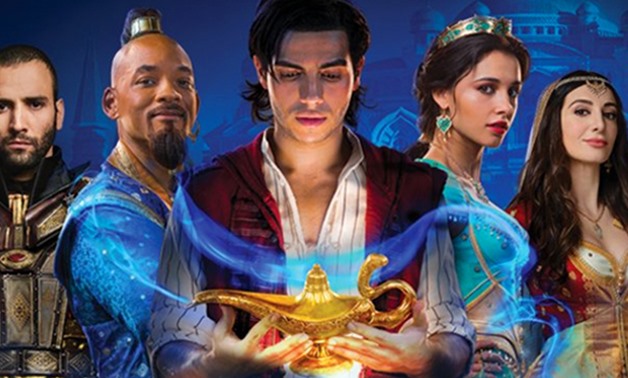 The highly anticipated live-action remake of the 1992 classic Disney film brought us back to the magical land of Agra- bah, where the local thief Aladdin, played by Massoud, falls in love with Princess Jasmine (Naomi Scott).

Will Smith turns in a remarkable performance as beloved blue genie,and the movie also stars Marwan Kenzari, Navid Negahban and Nasim Pe- drad, among others.

Aladdin is one of Disney’s timeless classics and a big part of our childhood, over generations and all around the world, so the decision to remake Aladdin was not easy as the director, cast and crew took on the challenge of producing a new version that had to not only match the old charm and unforgettable vibes of the original animated movie, but also add something new.

Another challenge that the filmmakers took on was assign- ing the leading role to an up-and-coming actor and unfamiliar face like Massoud; not to mention that the movie director Guy Ritchie who is famous for his British gangster movies is new to musicals; and finally, stepping into the shoes of the giant Robin Williams placed a heavy load on the shoulders of the great Will Smith.

The film has brilliantly overcome some of these challenges, exceeding expectations, while others might have resulted in minor tripods.

Richie took a huge risk, moving out of his comfort zone—a great and important step for any artist. However, I have to admit that Richie’s unfamiliarity with musical films was clear in some of the scenes, bringing on one of the few downsides of the remake, such as the “Prince Ali” song scene, which was something of a let-down.

I have to say that Richie’s genius in action did not carry over into the musical remake.

Smith’s challenge was twofold: to present the role from a dif- ferent, new perspective while stepping away from the dazzling persona that Williams had managed to imprint in our minds for years.

It was a hard mission, but I believe that Smith nailed it, brilliantly. Smith refreshed the Genie’s role; or in other words, modernized it, in a funny and amusing performance.

Back in his former comfort zone of comedy, Smith succeeded in imposing his personality even in the scenes where he was quoting directly from the original script; he was not by any means imitating Williams.

In the movie, the blue genie develops emotions for Jasmine’s handmaiden, Dalia, played by Nasim Pedrad, carrying out an effective comic yet romantic side plot. Pedrad’s performance was also one of the good surprises of the remake, with her genuine sense of humor that enriched the comic scenes of the humorous couple.
However, Smith’s singing could be seen as one weak point in the great actor’s performance, unlike Massoud who took us right back to the magic of the old animated movie with his captivating voice.

Looking pretty much like the iconic Aladdin in the minds of the 1990s generation, Massoud was one of the major hits of the movie, marking the birth of a new star, born in Egypt to Egyptian parents and raised in Canada.

Massoud and Scott shared amazing chemistry on screen, complemented by great talent and a credible performance from both rising stars.

There are certain types of roles where the actor/actress’ performances highly depend on each other.

If one is brilliant and the other is weak, both characters will end up weak, especially when they are a couple. This is exactly the case of Aladdin and Jasmine.

Massoud worked hard for this once-in-a-lifetime opportunity, preparing for the role through intense fitness training.

In a video posted on his official Facebook page, he addressed his audience in Arabic, encouraging them to watch the movie and expressing his pride at being part of a Disney project.

The video clearly revealed how Massoud was proud of his Egyptian origins, as he ended the video by repeatedly saying “Long live Egypt.”

In an interview with The Hudsucker, Massoud also revealed that he had long been inspired by the great actor Robin Williams, which pushed him to transfer during his undergraduate studies from the University of Toronto to an arts program at Ryerson University.

He has starred in over eight movies so far: What Happens Next, Let’s Rap, Ordinary Days, Masters in Crime, Final Exam, Aladdin and Strange but True.

As for Scott, whose rise to fame started with her role in the action movie Power Rangers, her character has undergone a positive twist from the original movie, focusing on women’s empowerment.

In the new film, Jasmine is not only a beauti ful, kind and charming princess, but she is also strong and she has a goal to rule Agrabah. Scott’s performance successfully underlined this empowerment concept, and she looked great doing it—her beautiful outfits were remarkable.

Last but not least, Kenzari who played the devilish minister Jaafar, did not quite meet the expectations of the anticipating audience.

Jaafar’s character is key to the master plot, where he tries to take advantage of Aladdin to get the genie to fulfil his greedy wishes and evil plan against the Sultan. Jaafar’s backstory was quite intense, he killed Jasmine’s mother to start a war between Agrabah and their neighboring kingdom.

This story on its own was enough to portray Jaafar as a power-hungry villain, as he was in the original story, with no need for all the dramatic exaggerations in the new film, which took away from the credibility and genuineness of the tale.

Effectively, these exaggerations contributed to weakening Jaafar’s character and, by extension, Kenzari’s performance.

But the biggest challenge of all was matching a number of immortal scenes in the original masterpiece, which the new version does, except for a few innovations in the last half-hour. The new Aladdin is 37 minutes longer than the animated version which is where all the new twists were added.

Moreover, in the new movie,the story is narrated by the genie instead of a street peddler as in the old film. And with new lyrics, inspired by the old song written by iconic Disney lyricist Howard Ashman, “Friend Like Me” overwhelms with sweet old memories.

The great Ashman wrote the lyrics for Aladdin, Beauty and The Beast, and The Little Mermaid.

The new Aladdin is an amusing family movie with a fairytale ending, and as a big fan of the original animated film, I loved the remake with its colorful scenery, captivating songs and dazzling scenes.

As Massoud told The National, “The biggest message of the film is that it doesn’t matter who you are or where you come from, you have to learn that you are good enough and the thing that makes someone special is what’s in their heart.”