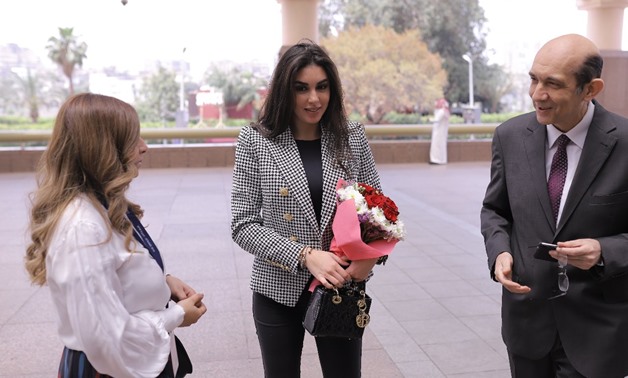 FILE - Yasmine Sabry during the honoring

CAIRO - 23 April 2019: Egyptian actress Yasmine Sabri was named Ambassador of African Women on Tuesday, April 23 during the Arab African Conference on Women's Empowerment in the presence of ministers and dignitaries from across the Arab region and the African continent.

This comes as a culmination of Sabry's activities as Ambassador of "Enti el Aham" (You come first) campaign and in appreciation of her efforts to support and empower women in various fields. Sabry participated in several charitable and development projects.

“Thank you for coming. It is a great honor to receive such an important award and to be nominated as the Ambassador of African Women,” said Sabry.

“Enti el Aham campaign is the largest campaign supporting women in the modern age, aiming at empowering women medically, economically and culturally. The campaign has carried out several projects and events to raise the awareness of Arab and African women and defend their rights. It also combats all forms of violence and discrimination against women in pursuit of the goals of sustainable development 2030," Sabry elaborated.

“I sincerely thank each and every one of you for attending the Arab-African Conference for the Empowerment of Women. I would also like to thank Dr. Amany Asfour, president of the International Federation of Businesswomen,” the star continued.

“Your amazing work and efforts in the field of women's rights and the empowerment of women really inspire me and every African girl to overcome all challenges and achieve our dreams,” Sabry stressed.

“I also promise you to improve my work by working hard to reach every girl and woman on the African continent; let us work together for a better and more promising world for African women,” concluded the new Ambassador of African Women.