Children may have built archeological city of Amarna 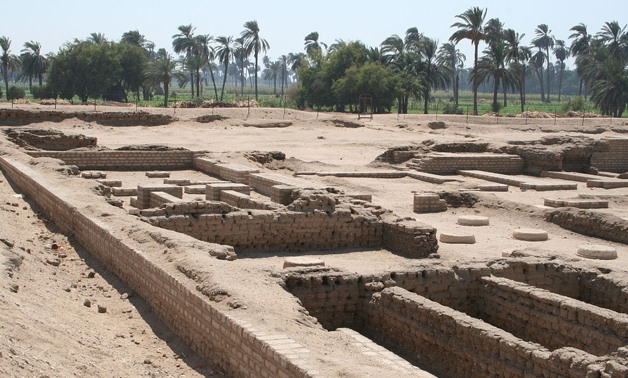 CAIRO – 7 June 2017: Recent excavation implied the possibility that the Ancient Egyptian city of Amarna was built mostly by children, teenagers and youth.

Tel El Amarna is an Egyptian archaeological site that represents the remains of the capital city established and built by Akhenaten in the late Eighteen Dynasty. Amarna was established on the East Bank of the Nile in Minya Governorate by Akhenaten and was abandoned after his death.

‘’ Between 2006 and 2013 I was lucky enough to work for the Amarna project on an excavation that studied the human remains found in a grave for ordinary Egyptians behind South burial escarpment’’ said Mary Shepperson, a freelance archaeologist and writer in The Guardian.

Examining these remains as recounted by Shepperson proved that they have died as a result of poverty, excess work, bad health status as well as injuries.

In 2015 Shepperson said that they excavated another ordinary cemetery at the Northern side of Amarna. The northern cemetery was obviously simpler than the south cemetery, as there were no goods in the cemetery and the matting used to wrap the bodies was very coarse. Nearly all the skeletons found in the northern cemetery belonged to children, teenagers and youth.

‘’The initial skeletal analysis of 105 individuals excavated at the North Tombs Cemetery in 2015 was completed by Gretchen Dabbs of Southern Illinois University. More than 90% of the skeletons have an estimated age of between seven and twenty-five years, with the majority of these estimated to be younger than fifteen. Essentially, this is a burial place for adolescents’’ said Shepperson.

The pathology analysis made to north tombs cemetery revealed that most of the 15-25 years old had some kind of traumatic injuries and 10 percent of had osteoarthritis. Such kind of illnesses is not normal at this young age except if they were performing continuous heavy labour.

‘’The absence of older adults suggests two possibilities; either workers were released or re-assigned when they reached full adulthood, or the nature of the work and living conditions meant that none of the workers lived much past twenty-five. Indeed, it seems they were lucky to make it to fifteen,’’ said Shepperson.

Shepperson recounted that what they found in the northern cemetery implies the strong possibility that Akhenaton established Amarna city at least partly with child labour.