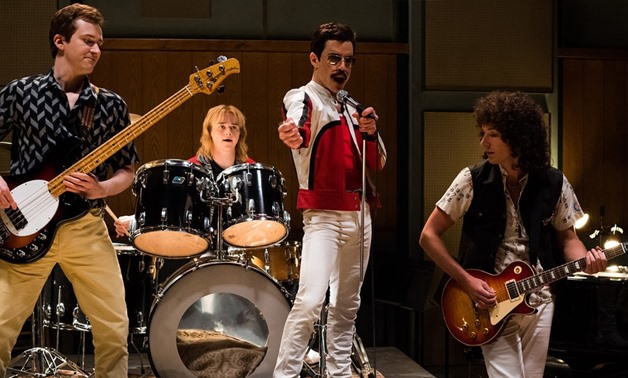 This biopic portraying the life of Freddie Mercury which has stunned audiences and taken home two Golden Globe awards—one for best drama and the second for the brilliant performance by Egyptian-American star Rami Malek for his portrayal of Mercury—is a series of poignant flashes into the life of a creative genius.

Of course a creative genius doesn’t come from a vacuum, and Mercury seems to be a cluster of all his passions: opera, music, costumes, and more. His expressive spirit made him immortal, through music that lived on for several generations.

Mercury’s story is one worth telling—and Malek has succeeded in bringing the iconic performer back to life. Portraying Freddie’s energy, particularly during concerts (Queen’s extraordinary 1985 performance at Live Aid serves as both the opening and closing of the film), Malek’s impressive rendition of the transformation of the shy Zanzibari immigrant Farrokh Bulsara into the iconic Freddie Mercury undoubtedly carries the movie and is its main strength.

At first Malek’s plummy accent as he plays a young aspiring musician who goes a long way during the film from the time he ap- proaches a band he likes backstage at a club in London to show the lead singer a song he had written and his imitation of Mercury’s famed overbite seems exaggerated, but later into the movie, Malek seems to manage to grow into the role. Not only does he perform with excellence, he also has clear self-confidence.

Malek replaced Sacha Baron Cohen, who was originally cast in the role of Mercury, and director Dexter Fletcher stepped in to replace Bryan Singer, so to some extent as a result of cast changes, the movie struggles to find a fresh way to tell its story but on the other hand it was narrated with the benefit of hindsight.

Malek’s performance honored Freddie, and at the same time Mercury’s rich character provoked Malek’s acting talents, so there was a state of mutual interest between both of them, what one can call win-win situation.

Unlike my expectations Bohemian Rhapsody was at times funny, especially in the parts that portrayed the band’s personal interactions and personalities. The movie revealed an unknown human side, that of Freddie’s re- lationship with his father, something his fans always wondered about.

Bohemian Rhapsody may have some of the weaknesses biopics often do; the two-hour film doesn’t sink into the hit musician’s life with enough depth, nor does it address the sexual tensions of the 1970s. While some critics argue that Paul Penter, Mercury’s manager, is not delved into enough, I find that to be a reductionist argument.

What I did find disappointing was that audiences are not invited into the scenes behind some of Queen’s big- gest hits, such as “Bohemian Rhapsody,” “Another One Bites the Dust” and “We Will Rock You” which were tack- led in a cursory manner, without the necessary back story about the creative process behind each one.

Yet the film does have its moments. One particular scene demonstrates the film’s issues and Mercury’s true spirit. Bored and starved for change, Mercury one day gets bored from tour- ing and dresses in an ermine mantle and a crown.

His band mates Brian May (Gwilym Lee), drummer Roger Taylor (Ben Hardy), and bassist John Deacon (Joseph Mazzello) are visibly uncomfortable as Mercury greets them enthusiastically. One of them criticizes him, telling him, “This isn’t really our scene, Freddie”— almost making it seem like the filmmakers wanted The audience to side with Mercury’s band mates.

Clearly the director wants us to realize how much Freddie needed the support of his band members to counteract the highly sexualized world he lived in.

Mercury’s sexual expression constituted his freedom of free- dom, and fans have always felt the jubilation of that in Mercury’s one of a kind voice. Yet May and Taylor, who have publicly praised the film, want viewers to see the sweeter side of Mercury who loved everyone but failed to accept himself and how he was. Mercury succeeded in showing the public what he wanted us to see—an iconic, talented singer—not the dark side of his personal life.


Mercury was a gentle and generous man shaped by his first meaningful relationship with Mary Austin (Lucy Boynton) with whom he was deeply in love. As lovers they even become engaged, although it was to some extent clear early on that a romantic re- lationship between them could not last. Yet Austin was Freddie’s true love and he left her his estate after his death.

No matter how you feel about the musician, Bohemian Rhap- sody will fill your heart with joy, happiness and emotion through the performances of an exemplary cast that exceed simply Malek’s performance. Boynton as Austin, Gwilym Lee (Brian May), Ben Hardy (Roger Taylor), Joseph Mazzello as (John Deacon), Allen Leech (Paul Prenter) and Aaron McCusker(Jim Hutton) all turn in performance that allow the viewer to experience a suspension of disbelief.
On the eve of the Oscars the movie is not only critically ac- claimed, it has broken the box office, raking in over $700 million to become the highest grossing biopic of all-time. For Malek, who at the Golden Globes dedicated his win to Mercury, the role has been a career-defining moment. “Thank you to Freddie Mercury for giving me the joy of a lifetime,” Malek said on the Golden Globe stage. “I love you, you beautiful man.
This is for and because of you, gorgeous.” Malek even went on to say that he drew personal connections with Mercury after depicting him. Yet the success should not come as a surprise, as the screen- writer Anthony McCarten had previously written brilliant biopics such as The Darkest Hour and The Theory of Everything. It’s also not surprising that Bohemian Rhapsody doesn’t dwell on Mercury’s declining health and death, the circum- stances of which many fans will find common knowledge. Instead it explores other aspects, the music perhaps being the most essential.

The songs Mercury left to Brian and Roger to finish are touching and truly generate hope. The performer intended to leave his fans something before he left this world. As Freddie told his manager, “I don’t care what you do with the music, just never make me boring.

But Mercury never was boring and his music, certainly, lives on. If you’re a major Queen fan looking for a biopic that’ll touch you on everything that made the band as iconic as it was, you’re in for a disappointment.

No film can do so in a mere couple of hours and if you are looking for Freddie’s and Queen’s dark sides and scandalous secrets when you step into the theater to watch Bohemian Rhapsody, then this simply is not your movie.