By: Mustafa Marie
CAIRO – 7 January 2019: "Kol Youm" (Everyday) program aired on ON E presented on Jan. 5 a report on many actors and actresses celebrating veteran actress Nadia Lutfi’s 82nd birthday in the presence of Minister of Culture Inas Abdel Dayem.

Veteran actor Samir Sabri sang “Sukkar helwa el-Donia” (Sweet as sugar) in celebration of lutfi’s birthday, whereas actress Dalal Abdel Aziz stated that lutfi’s celebration is a 3 in 1 celebration, as the actress’s biography book has been signed and honored by the minister of culture.

In addition, veteran actress Ragaa el-Gedawi commented “I wish her all the best, even though we don’t see her much. She is not only a veteran actress; she is also a sister and a friend.”

“My relationship with her started 40 years ago; we are close friends and are always together,” commented veteran actress Samiha Ayoub.


During the birthday celebration, the minister of culture granted the veteran actress the State Award for Arts, in the presence of numerous actors and actresses such as Ragaa el-Gedawi, Samiha Ayoub, Dalal Abdel Aziz, Hend Sabry, Anoushka, Emy Samir Ghanem, Farouk Falawkas, Samir Sabri among others.

Paula Shafik, better known as Nadia Lutfi, is a retired Egyptian actress. She is daughter to an Egyptian accountant and a Polish mother. In her prime, she was one of the most popular actresses during the final phase of Egyptian cinema's "Golden Age".

Lutfi began acting as a hobby; when she was 10 years old she participated in a play at her school and did very well. When the 24-year-old was about to make her screen debut in 1958, Omar Sharif was the reigning king of Egyptian cinema, and his wife, Egyptian superstar Faten Hamama, its queen.

The star couple had just had a smash hit with the film "La Anam" (Insomnia) with Hamama playing a willful teen who destroys her father's marriage.

With her fresh new name, the young actress was spotted by director Ramsis Naguib and she took her first role in a modest, black & white drama, “Soultan” (Sultan) in 1958.

Her second picture was a smaller role in one of the film landmarks of its time, “Cairo Station”. In 1963, she played a Frankish woman warrior of the Crusade era, donning full armor to go into battle against her Christian-Arab lover, in “Naser Salah el Dine” (occasionally shown on US TV as Saladin and the Great Crusades).

In “Lil-Rigal Faqat” (Only for Men) (1964), Lutfi and co-star Su'ad Husni played women geologists who, denied employment, respond by disguising themselves as men and going to work, where they find they have to suppress their romantic natures to sustain the disguise.

In the mid-1960s, she starred in two films that were based on stories by Nobel-winning author Naguib Mahfouz, just a few years following the publication of his widely banned novel of Moses, Jesus and Mohammed, “Children of Gebelawi”.

Lutfi finished the decade starring in 1969's “Abi foq al-Shagara” (My dad above the tree), as a night club dancer who beds a much younger man, then discovers that she once knew his father equally well.

She starred in several films with Souad Hosni, like “Al-Saba' Banat” (The Seven Girls).
In the 1970s, her career wound down as Egypt's "Golden Age" for films came to a close. Having made close to 50 films in the first 11 years of her career, she only made three in the decade that followed, and has not worked in film since 1981.

In 2006, she returned to the spotlight when a video by young Lebanese singer Nourhanne recreated a musical scene from one of her first films, “Bain al Qasrayn”.

In 2014, the Cairo International Film Festival paid tribute to Nadia Lutfi by using her photo on the Festival's official poster. 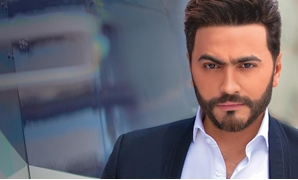 Donia Ghanem's 'Min Awel Nazra' to be released in Ramadan 2019