Part one ... 2018: The year of archaeological discoveries 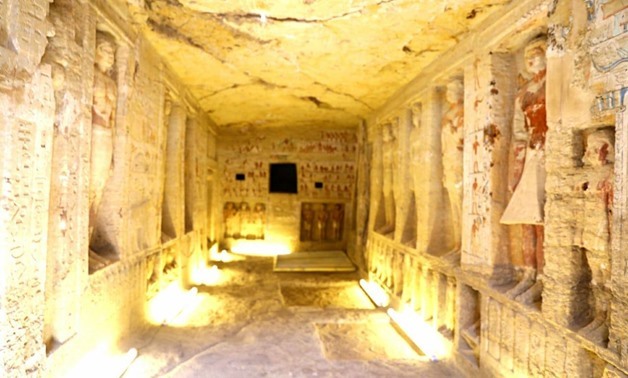 An “exceptionally well-preserved” tomb belonging to a Fifth Dynasty royal priest was discovered at Saqqara by an Egyptian archaeological mission on Saturday - Egypt Today.

CAIRO – 28 December 2018: Early 2018, Egyptian minister of Antiquities Khaled Anany announced 2018 as the year of archaeological discoveries. Anany added that every week and every day in some cases, an archaeological discovery is revealed; hence, Egypt should be introduced to the global stage in a positive way.

January 2: Remains of mud-brick walls, four furnaces and various other assorted artifacts were uncovered at the ancient city of Buto in Kafr El-Skeikh Governorate.

The first of the artifacts uncovered are fragments of an unknown royal statue, possibly belonging to King Psmatik I. Carved in black granite, the statue is missing all of its limbs and head, and depicts the unknown king wearing the royal kilt, or Shendit, the tell-tale sign that this was a statue for royalty. Other uncovered artifacts include a quartzite statue of the god Hur, the remnants of a sculptured hand, a variety of pottery, fragments of the Menat Necklace which represents the Goddess Hathor.

January 8: A part of a statue for Amenhotep III made of black granite was found in Sohag Governorate. The discovered part showed clearly that the statue was presented by the left foot forward, which is a tradition, shown in the statues of the kings of ancient Egypt. Also, in front of the right foot, there is a collection of Hieroglyphic writings about the coronation and birth of King Amenhotep III.

January 10: a number of archaeological elements and remains of tombs, dating back to the Greco-Roman era, were uncovered during excavations carried out in the eastern section of the Hellenistic cemetery. The most important of these discoveries is a tombstone that was once used to close one of the burial shafts. These remains are a collection of offering vessels and lamps decorated with scenes of deities.

January 11: There were two massive archaeological discoveries in Aswan. The first discovery was an administrative complex that dates back to the fifth dynasty of ancient Egypt. The unearthed complex is considered the oldest archaeological discovery in Tell Edfou site. This discovery was special because it sheds light on the history of the fifth dynasty, and how ancient Egyptians used internal architectural structures to store goods, raw material, and gemstones. More than 200 artifacts which belonged to King Djedkare Isesi, in addition to many tools used in trade campaigns to Africa were also discovered.

The second discovery was a statue of a man and his wife while doing some religious rituals, and a statue made of sandstone of a seated man, in addition to two statues of god Horus in the shape of a raven at the temple of Kom Ombo in Aswan

January 13: A stela of 19th Dynasty King Ramses II was discovered at the San Al-Hagar archaeological site in the Sharqiya governorate. The discovered stela is carved in red granite and depicts King Ramses II presenting offerings to an ancient Egyptian deity.

January 17: A tomb dating back to the second century has been uncovered at the Al-Alamein archaeological site. The discovered tomb contains a rock staircase leading down into the main chamber of the tomb, where burial holes known as “Locauli” are prominent. The southern part of the tomb contains a Greek decoration on the wall, depicting a horn with a basin surrounded by drawn on leaves and flowers.

February 4: An Old Kingdom tomb was discovered in the Western Cemetery located in the Pyramids area in Giza belonging to an ancient Egyptian woman named Hetpet. The tomb dates back to the Fifth Dynasty, about 4,400 years ago. Hetpet was a woman with a high social position in ancient times; a top official in the royal palace during the end of the Fifth Dynasty. Hetpet has a number of cognomens among which is the priest of the goddess Hathour.

Hathour is a pharaonic goddess who symbolizes the principles of joy, feminine love, and motherhood. El Waziry announced that Hetpet played important roles at that time especially in the agricultural field.

February 24: 8 tombs that contain about 40 coffins of Pharaonic priests and more than 1000 Ushabti statues were discovered in Tuna el-Gebel area in Minya Egyptian governorate. The discovered tombs are full of jewelleries, potteries and pharaonic jars.

This discovery as described by the Minister of Antiquities Khaled Anany was one of the largest and most important archaeological discoveries unearthed in recent times. This archaeological discovery is documenting some issues related to the live of ancient Egyptians in Minya province tens of centuries ago. The most prominent finds in these tombs were a gold mask, coffins, mummies and statues.

February 28: New parts of the statue of Ramses II were found in the Temple of Kom Ombo in Aswan. The importance of this discovery lies in finding new proof of the existence and use of this temple in the modern state era. Before this discovery, the only proof was represented in Tuthmosis III, where there is a visible part in the statue that depicts King Ramses II accompanied by God Sobek and God Horus, the main gods of the Temple of Kom Ombo.

March 1: the oldest figurative tattoos in the world on the upper arms of two 5,000-year-old Egyptian mummies were uncovered.

Tattoos depicting a wild bull and a Barbary sheep were found on the upper arm of a male mummy, while the shoulder and upper arm of a female mummy bore "S"-shaped motifs.

“The location of these tattoos suggests they were designed to be highly visible on the upper arm and the shoulder. T discoveries push back by 1,000 years evidence for tattooing in Africa.

April 4: The remains of a Graeco-Roman temple was uncovered at the Al-Salam archaeological site. The outer wall of the temple leads to a front courtyard with entrances to chambers.

April 11: An assortment of 4500 fragments from King Psamtek I's colossus were uncovered at Souq el-Khamis area in Matariya. The discovered fragments helped to confirm that the colossus depicts a standing king, with his left arm in front of the body while the right one is extended to the back.

April 22: Two important exceptional discoveries occurred. The first is the discovery of a marble head of Roman Emperor Marcus Aurelius in Aswan and an Osirian temple in Luxor.

The head is of Emperor Aurelius with wavy hair and beard. The Roman emperor’s head was described as rare, because in general, statues of Roman rulers are extremely scarce.

The second discovery was the Osirian temple which was uncovered at the southern side of Karnak Temples’ tenth pylon. The temple contains architectural elements of a late-period shrine dedicated to the god Osiris-Ptah-Neb.

The temple, which was found in a good state, consists of an entrance, foundation remains, columns, inner walls and ruins of a third hall located at the eastern side. The Osirian temple also houses paving stones from the shrine floor, along with other extension structures built during ancient times.

The shrine is not located on the eastern or northern side of the Amun-Re temple according to ancient Egyptian belief, which makes this discovery a highly important one. The shrine was discovered on the southern side, indicating the accuracy of the Osirian belief at that time.

Also among the discovered items were a collection of clay pots, remains of statues and a winged frame relief decorated with offering tables bearing a sheep and goose. The relief holds the names of the kings Taharka and Tanut Amun.

April 30: An ancient royal celebration hall dating back to the era of Ramses II was discovered at Matareya district.

“The Hall was unearthed below the soft-brick buildings and commercial residential areas that date back to the third transition period, particularly the 22nd and 23rd dynasties’ eras. The discovered hall has a rectangular floor of 2.9 m × 1.9 m, consisting of limestone tiles, rising 80 cm from the ground.

The discovered items include the main building, a layer of the third transition era and the late era, as well as the royal celebration hall.

A number of valuable artifacts were also uncovered such as five stone blocks carved from the reign of King Ramses II, a painting of the high priests of the Sun Prince Nept Ma Raa, in addition to some pottery figures dating back to the 27th Dynasty, one of which was a small dog-shaped statue.

This is the first of three articles that will uncover archaeological discoveries in Egypt during 2018.