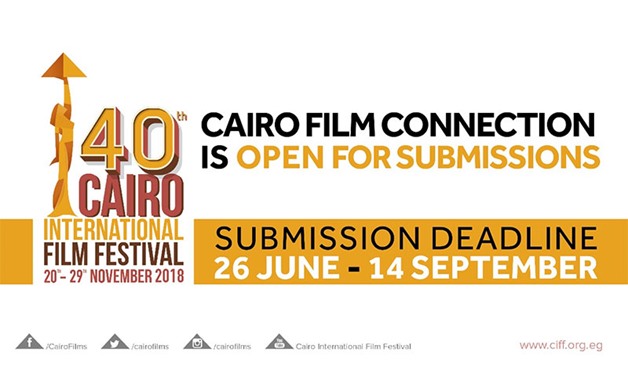 By: Egypt Today staff
CAIRO – 14 November 2018: The 40th Cairo International Film Festival (CIFF), running from November 20 to November 29, will feature seven Egyptian films. Among these films, one film will compete for the Golden Pyramid Award.

The Egyptian films are:

Competing in the international competition, this fiction film is directed by Ahmad Abdalla el-Sayed. The film tells the story of Moe, Toutou, and Mostafa, three individuals who meet in an extraordinary night, breaking the social norms and boundaries, and leading a journey they didn‘t expect inside their city, where they see a side of it they never witnessed before. "Leil Khargi" is a joint Egyptian-Emirati production starring Basma, Karim Qassem, Mona Hala, Amr Abed and Magdy Ahmed Ali.

The 2018 fiction film is directed by Khaled el-Hagar. The film tells the story of Kamal Helmy, a famous writer in his late forties, who lives alone in Cairo’s famous Immobilia building in down town Cairo. Since the death of his wife and the departure of his children, he has suffered from loneliness and a form of schizophrenia. One day he invites a girl called Samah, whom he has befriended on Facebook, in an attempt to alleviate his isolation. But after she arrives, an accident occurs and he discovers, together with his neighbor and best friend Habib, that he has been used by her. "Garemet Al-Immobilia" stars Hany Adel, Nahed al-Sebaie and Tarek Abdel Aziz.

Competing in the Horizons of New Arab Cinema Competition, this Egyptian-Emirati-French production tells the story of Taheya and her brother Saqr whose only dream is to escape from their life in an impoverished Cairo neighborhood. The film is directed by Ahmed Fawzi Saleh and stars Mahmoud Hamida.

"Kilo 64" also competes in the Horizons of New Arab Cinema Competition. This 2018 documentary film is directed by Amir el-Shenawy and tells the story of an ambitious pharmacy graduate who shifts his career and starts a farming business at Kilo 64 off Cairo-Alexandria desert road. Moved by the spirit of the January 25 revolution, Wael el-Shenawy, 24, starts an agricultural project with the aim of making a social impact and contributing to the Egyptian economy, but not everything goes as planned.

The fiction film competes in the Critic Week Competition. Directed by Ahmed Magdy, the film tells the story of Ahmed, a young Egyptian man who is lost and depleted of faith.

One night he finds himself saving a girl he does not know by getting her enough money to have an abortion. Ahmed gets swallowed into the madness of the city and gets involved with an eccentric group of young people led by an enigmatic girl who is trying to uncover the mystery behind the Giraffe hidden at the zoo.

The Cairo International Film Festival (CIFF) is an annual festival organized by the Cairo International Film Festival Foundation and sponsored by public and private organizations in Egypt and around the world. The aim of the Festival is to strengthen the artistic links between countries and to build bridges between cinema professionals from different cultures, thus promoting the film industry in Egypt, the Arab world, and the whole world. In 2017, the Italian drama film “The Intrusion” directed by Leonardo di Costanzo won the Golden Pyramid for Best Film.