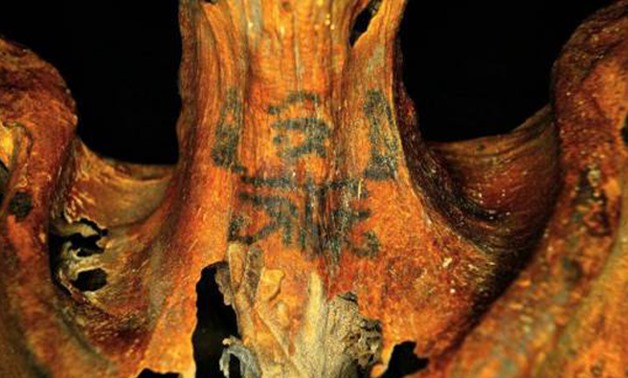 The unique 3,000-year-old tattooed mummy, uncovered in Deir El-Madina in Luxor’s west bank in 2014, belongs to an elite woman

CAIRO - 18 October 2018: The unique 3,000-year-old tattooed mummy, uncovered in Deir El-Madina in Luxor’s west bank in 2014, belongs to an elite woman, but her name and rank have not been revealed, Ministry of Antiquities announced on Oct. 17.

The archaeological mission of the French Institute for Oriental Archaeology (IFAO) finished its studies on the tattooed mummy, which was found during the mission’s excavation works in Deir El-Madina.

Secretary General of the Supreme Council of Antiquities, Mostaf al-Waziri, remarked that 30 tattoos of different figures such as a wild bull, a sheep, a lotus flower, a baboon and the Eye of Horus were depicted all over the mummy’s body.

He pointed out that her name and position have not been identified; yet, the variety of tattoos on her body could refer that she was a high-ranking person.

Waziri further remarked that it is believed that the woman had drawn many tattoos on her body to show the significant religious role she may have played during her lifetime.

The secretary general remarked that several mummies with small tattoos were previously found, but this mummy is unique as it features unprecedentedly real tattoos.

He stressed that the French archaeological mission used the latest technology to reveal more details about the tattoos, while maintaining the same environmental conditions, in which the mummy was buried 3,000 years ago.

On March 1, 2018, the British Museum announced that researchers discovered the oldest figurative tattoos in the world on the upper arms of two 5,000-year-old Egyptian mummies.

Tattoos depicting a wild bull and a Barbary sheep were found on the upper arm of a male mummy, while the shoulder and upper arm of a female mummy bore "S"-shaped motifs.

“The location of these tattoos suggests they were designed to be highly visible on the upper arm and the shoulder,” Daniel Antoine, curator of physical anthropology at the British Museum, told Reuters, adding that the discoveries push back by 1,000 years evidence for tattooing in Africa.