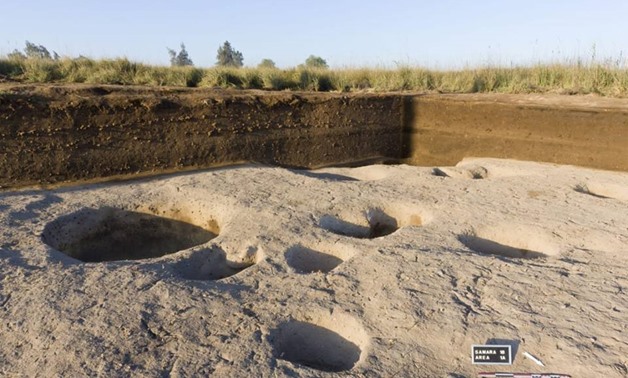 An Egyptian-French mission has discovered one of the oldest villages ever located in the Nile Delta - Ministry of Antiquities official Facebook Page.

CAIRO – 2 September 2018: An Egyptian-French mission has discovered one of the oldest villages ever located in the Nile Delta.

“Discoveries from the Neolithic period are substantially anonymous in this area, so this discovery is of great importance,” announced Frederic Geyau, the mission head.

Ayman Ashmawi, the head of the Ancient Egyptian Antiquities sector, recounted that the importance of this discovery is based on the fact that these buildings, which date back to the Neolithic period, are not known in this region, and were only discovered by the Egyptian Exploration Society in one location, namely Sais in Gharbia Governorate.

The mission was working at the Tell El-Samara site in the Delta governorate of Daqahliya.

The Egyptian-French mission excavated the remains of a Neolithic dominion, whose occupation extended until the second dynasty (ca. 4200-2900 BC), at the bottom level of El-Samara site.

The information gathered at Tell El-Samara since 2015 gives a great opportunity to acquire a better image about the prehistoric societies living in Lower Egypt a thousand years before the first dynasty.

Researchers strongly believe that communities settled in the wetlands of the Nile Delta as early as the end of the fifth millennium BC; this fact is clear from the pottery and artefacts discovered in the site.

Ashmawi said that the mission has also discovered a dozen silos containing a huge quantity of animal bones and botanical remains, which will allow scientists to study the survival strategies of these populations.

He also added that the analyses of these organic remains will be carried out using the latest technologies in conjunction with exploring the unexcavated areas. These analyses will provide a complete vision about the Nile Delta's first population, and will gather information about the origins of agriculture and cultivation in Egypt.


Sais archaeological site is rich with antiquities. An Egyptian archaeological mission at the Supreme Council of Antiquities has uncovered parts of a huge red brick building, which are probably part of a bath dating back to the Greco-Roman era on May 24.

The discovered building was about 16 meters long. The mission also found pottery vessels, terracotta statues, bronze tools, a stone fragment engraved with hieroglyphs and a small statue of a ram at the archaeological site.

2018 is considered the year of archeological discoveries. The Egyptian Minister of Antiquities Khaled Anany announced on Feb. 24 the discovery of eight tombs that contain about 40 coffins of Pharaonic priests and more than 1,000 Ushabti statues in Tuna el-Gebel area in Minya, an Egyptian governorate.

“Today we are announcing the beginning of a new discovery, the tombs are full of jewelries, potteries and pharaonic jars,” Anany recounted on Feb. 24.

The most prominent finds in these tombs were a gold mask, coffins, mummies and statues. The Egyptian Ministry of Antiquities added that the area of the discovery requires years of hard work, pointing out that the main advantage of this discovery is that it was discovered by Egyptians.

It is worth mentioning that this discovery is considered the second discovery in 2018 after a new tomb was discovered in the Western Cemetery located in the Pyramids area in Giza to an ancient Egyptian woman named Hetpet, as announced on Feb. 3 by Anany.

Hetpet was a woman with a high social position in ancient times. She has number of cognomens of which is the Priest of the goddess Hathour. Hathour is a pharaonic goddess who symbolizes the principles of joy, feminine love, and motherhood.

Archaeologists at Cairo University have discovered catacombs including 18 non-royal mummies in Tuna el-Gebel on May 13, 2017. The burial shafts were found in the area, adding that the shafts led to a number of corridors inside a cachette of mummies. This discovery was the first human necropolis found in central Egypt with so many mummies.

Tuna el-Gebel village is famous for having many archaeological tombs, which contributed greatly to the revival of archaeological and touristic life, and helped drive Arab and foreign tourists to the region once again. It is an archaeological village located in Al Minya Governorate. It has a population of more than 20,000 people.

Tuna el-Gebel was originally named “Towns” in the Pharaonic era. It was named Tahnet in the Roman era. Both names mean the “blessing” or “flood”. Tuna el-Gebel was considered a cemetery in the Pharaonic, Greek and Roman periods and it contains many important monuments including the tomb and the chapel of Isadora, the martyr of love, which dates back to the Greco-Roman period.

Tuna el-Gebel houses the tomb of the priest “Petosiris” dating back to the Greek era, the villa of the Dean of Arabic literature Taha Hussein, in addition to the existence of many archaeological sites that have not been discovered yet.