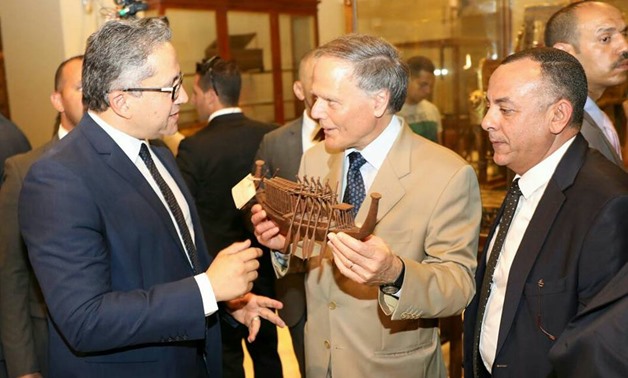 During their visit to the museum, the two ministers visited the temporary exhibition that hosts important artifacts uncovered by Italian excavations in Egypt; these artifacts are displayed for the first time, according to Elham Salah, head of the museums sector at the Ministry of Antiquities.

"More than 20 Italian archaeological missions are currently working in Egypt upon the approval of Egypt’s Ministry of Antiquities and under the auspices of the Italian Ministry of Foreign Affairs and International Cooperation," Salah recounted.

Salah elaborated that the 20 Italian archaeological missions work in different sites in the Valley of the Eastern Desert, the Western desert, oases, and the Delta.

Salah added that the temporary exhibition houses 180 artifacts. "The most important among the artifacts is a papyrus that comes from Gebelein, found by the archaeological expedition from the Museo Egizio in Turin.

It is one of the most ancient administrative papyri we know," Salah said.

The papyrus dates back to the Old Kingdom. During the last century it was restored in Turin, and was restored again in Cairo in 2005 by Corrado Basile who established the restoration laboratory for papyri in the Egyptian Museum. The laboratory was financed by the Italian Ministry of Foreign Affairs.

Salah pointed out that the most famous object among the Italian discoveries is the statue of Pharaoh Merenptah that welcomes visitors at the main entrance of the museum.

Sabah Abdel Razik, head of the Egyptian Museum, said that the exhibition also includes a hoard of 171 golden coins discovered by the Papyrological Institute of Florence's archaeological mission in Antinoupolis, close to Menya Governorate.

"Also, the exhibition displays a rare lamp with an elegant design that was found at the tomb of the overseer of works, royal architect Kha, and his wife Merit in Deir el-Medina Luxor. It dates back to the reign of Amenhotep III (about 1388-1351 BC)," Abdel Razik said.

She further added that various ancient textiles are in display, including a funerary shroud discovered by Edda Bresciani (University of Pisa) in Saqqara, depicting the god, Osiris, surrounded by a snake, flanked by Isis and protected by Nephtys, in addition to a Coptic cloth with two hairnets from Antinoupolis uncovered by the Papyrological Institute of Florence's archaeological expedition.

She revealed that a stela uncovered by L’Orientale University of Naples' expedition is being showcased in the exhibition for the first time. The stela possesses a historical significance, as it dates back to the Middle Kingdom (Reign of Amenemhat III, 1831-1786 B.C.) and testifies to the Egyptian trips to the exotic Land of Punt.

"It was found in Mersa Gawasis, a pharaonic harbour on the Red Sea, from which the Egyptian expeditions sailed," Abdel Razek added.

"The first archaeological expedition in the history of Egyptology was a joint French-Italian mission, where famous Italian Egyptologist Ippolito Rosellini worked side by side with Jean-François Champollion, the decipherer of Egyptian hieroglyphs," Dr. Giuseppina Capriotti, head of the Italian Antiquities Institute, stated.

Italian missions are currently using the most recent technology to carry out continuous excavations and contribute to the conservation of the Egyptian cultural heritage, in collaboration with Egyptian authorities, according to Capriotti.