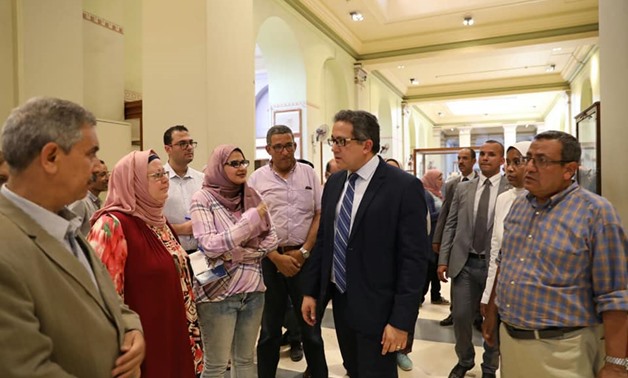 By: Egypt Today staff
CAIRO – 26 July 2018: The Ministry of Antiquities is working on a long-term plan to register the Egyptian Museum in Tahrir in the UNESCO World Heritage list, Minister of Antiquities Khaled al-Anany announced on Wednesday.

This was during Anany’s tour at the Egyptian Museum in Tahrir to follow up the upgrade of the displays in the exhibition space and the procedures the museum is set to take after Tutankhamun’s treasures are moved to the Grand Egyptian Museum.

Anany remarked that the ministry had previously declared that on November 15, which marks the anniversary of the museum’s establishment in Tahrir, the ignored ancient treasures including the shabtis of Yuya and Tjuya and golden Tanis collection will be displayed. He referred that they are as beautiful as Tutankhamun’s artifacts.

The minister further explained that the ministry seeks to work with five international museums; Torino Museum, Berlin Museum, Louvre and the British Museum through a grant from the European Union (EU). A committee of the Ministry of Antiquities is working on a long-term plan to transform the Egyptian Museum’s architectural style to that of UNESCO museums to be put in the World’s Heritage list.

The repair team used modern materials and methods in the process of packing and moving the bed. They also used precise air lifters that facilitated moving the bed from the base area without exerting any mechanical stress on it. Previous studies on the internal structure and wooden joints of the king's bed have been implemented using an X-ray device, which greatly helped to identify the weak points in the bed and determine the amount of intervention needed to maintain it during the transfer process.

The treasures of King Tutankhamun were exhibited in the Egyptian Museum located in Tahrir Square since their discovery inside King Tutankhamun's tomb in the Valley of Kings on the western bank of Luxor in 1922.

In earlier statements, the Minister of Antiquities had revealed that 50 percent of the work needed to build the new museum has been finalized and that the first phase will be inaugurated in 2019. The first phase will include a room for Tutankhamun’s relics.