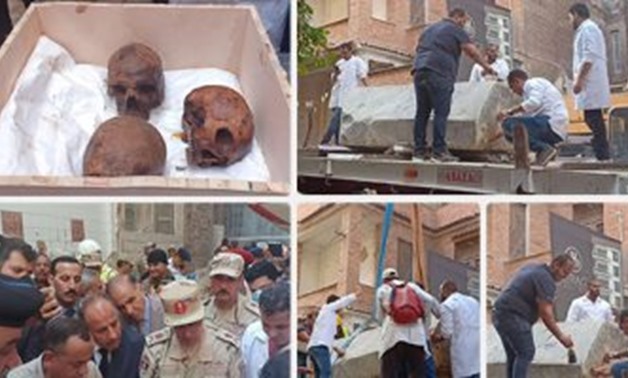 A photo complied by Egypt Today.


CAIRO – 21 July 2018: The ex-dean of the faculty of Archelogy Cairo University Mohamed Hamza revealed to Egypt Today some important facts about the 2,000-year-old sarcophagus that was unearthed in Alexandria.

“The sarcophagus was discovered in Sidi Gabr neighbourhood which is located in the Eastern part of Alexandria, this area was one of the tombs of the Eastern cemetery in Ancient Alexandria, foreigners who were living in Alexandria at that time used to be buried in this cemetery especially the Greeks and Macedonians living during the Ptolemaic era,” Hamza recounted.

Hamza pointed out that archaeological evidence shows that during the Roman era the Eastern cemetery was used less as people started using the Western cemetery more.

‘’Most probably this cemetery dates back to the second half of the Ptolemaic period, where the phenomenon of cremation was widespread according to Greek rites at the beginning, then it was replaced with burial without mummification or mummification according to Egyptian rites, such as those that spread during Queen Cleopatra’s reign, the last Ptolemaic queen,” Hamza added.

Hamza pointed out that the three mummies were found unburned inside the coffin, which indicates that the cemetery dates back to 30 BC. He explained that the allegations that claim that this sarcophagus has a strong relationship with the tomb of Alexander the Great are all scientific superstitions, because Alexander the Great was buried in Alexandria in a royal cemetery known as Soma or Sema located in the royal neighbourhood in the center of old Alexandria.

This neighbourhood was completely destroyed during the third and fourth centuries as a result of the outbreak of revolutions and wars carried out by the people of Alexandria against Roman emperors.

At that time Christianity became the official religion in Egypt, as a result many ancient pagan monuments were destroyed in the late fourth century.

“All the previous points towards the fact that the tomb of Alexander the Great will not be discovered except by pure coincidence,” Hamza recounted. That is mainly because the Greek historian Aklios mentioned in the fifth century that Suma is located at the intersection of the two main streets of the ancient city of Alexandria, which means that Alexander the Great’s tomb is located now in Nabi Daniel street in Alexandria.

“Since it is difficult to carry out excavations in this street because of the urban and demographic nature of the street, the tomb of Alexander will not be found except by pure coincidence,” Hamza explained.

On July 1, Egypt unearthed a 2,000-year-old sarcophagus in Alexandria, revealing that it is made of black granite of about 265 meters in length and 185 centimeters in height. The 30-ton tomb was found at a depth of five meters beneath the surface of the land.

On July 19, Egypt opened the mysterious sarcophagus, amid rumors of a "possible curse" that could be cast on the world once the sarcophagus is opened. Three decomposed mummies were found in the sarcophagus, declared Secretary-General of the Supreme Council of Antiquities Mostafa Waziri.


He further pointed out that no evidence such as silver or gold metallic masks, small statues, amulets or inscriptions were found to prove that the mummies belong to a royal family.

In this regard, he denied the rumors spread by some international newspapers that opening the sarcophagus would unleash the curse that would bring disaster to the world.