The festival will kick off from July 25 to July 31.

Shadia who was born in 1931 as Fatma Shaker, played various roles and nailed movie genres that range from the political to the comic farce; but in addition to her diverse roles, Shadia was also a prolific singer whose songs also remain favorites on many playlists.

In fact, 25 years after retiring and completely disappearing from the limelight, her song “Ya Habebty ya Masr” (Egypt, My Beloved) became the voice of the January 25 uprising.
She was dubbed "Dalouet El Cinema" (The Cinema’s Sweetheart) by her loyal fans from all over Arab world.

Her fans consider her as their dear sweetheart singer. Shadia has enriched the Egyptian art with about 114 songs spanning over 37 years. She was enchanting with her melodious charming and light-heartedness.


Shadia debuted her acting career in 1947, at the age of 16, and was often cast in the role of a lively young girl. Then in 1953, she debuted her singing career and started taking on more dramatic roles, having just suffered the loss of a fiancé to the war. Shadia’s career turning point came when she married actor Emad Hamdy, who was 20 years older than her, but the marriage only lasted three years.

After her divorce from Hamdy, she married Fathi Aziz but also got divorced two years later. Her last and longest marriage was that to her on-screen love interest Salah Zulficar. That marriage lasted six years but ended in divorce in 1967.

More than a talented show woman, Shadia managed to encapsulate just about every issue facing the Egyptian woman; from young love and jealousy to struggling between careers and families, and all the way to women’s honor, poverty, prostitution, oppression and uprising against injustice.


One of her most iconic roles was Soheir, the famous actress who falls in love with the less prominent Ibrahim (played by Abdel Halim Hafez) in the romantic classic “Maaboudet El Gamahir” (The People’s Idol), which also features Fouad El Mohandes, Youssef Shaaban, Hassan Fayek and Zeinat Sedky. 2017 marks the 50th anniversary of the movie, but we still memorize scenes from it by heart. And when we ride our bikes, we still playfully sing one of the most popular duets in Egyptian cinema “Haga Ghariba” (A Strange Thing).


After her last role in “La Tas’alni Man Ana” (Don’t Ask me Who I am), Shadia officially announced retiring in the late 1980s, turning the page on her artistic career and dedicating her life and time to worship and looking after orphans and her nephews, never having had children of her own.

Shadia told the media back then that she preferred her fans to remember her as the young woman they knew, and doesn’t want them to see her old and wrinkled, and she has ever since remained true to that statement, having made very rare public appearances since her retirement.

Shadia starred alongside mega stars like Abdel Halim Hafez, Farid El Atrash and Kamal El Shennawy, with whom she co-starred in more than 30 films.
Shadia passed away on Tuesday, Nov. 28, 2017 at the age of 86 after being transferred to the hospital as she suffered a brain stroke. 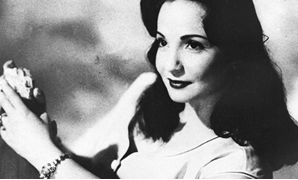