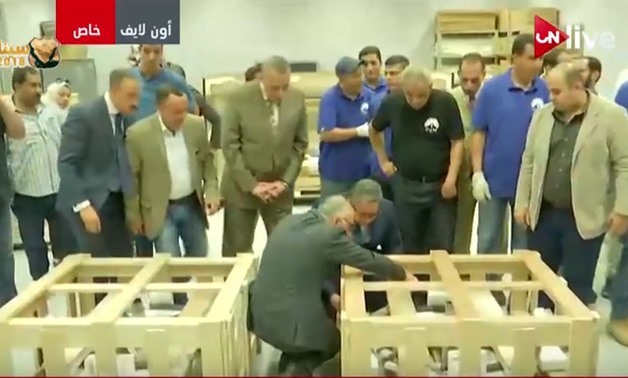 TV Screenshot of the sixth and the last chariot of Tutankhamun after arriving at the Grand Egyptian Museum on May 5, 2018.

CAIRO – 5 May 2018: After the arrival of the sixth and last chariot of Tutankhamun at the Grand Egyptian Museum (GEM), Egyptian Minister of Antiquities Khaled El-Enany declared that the transfer of the sixth chariot of Tutankhamun to the Grand Egyptian Museum sent plenty of messages to the whole world, the most important of which is that Egypt is safe and GEM is safe, and the burning accident that occurred at GEM a few days ago didn’t result in any kind of harm to GEM.

Enany noted that the chariot was transferred in an optimal and seemly way. “The chariot transfer sends a message to all the tourists around the world to come and visit Egypt; we have a museum named the Grand Egyptian Museum that will truly dazzle you all,” Enany stated, adding that the Grand Egyptian Museum will be very huge, which is why its inauguration will be divided into more than one stage. “The first stage of GEM’s opening will include the inauguration of the museum’s first part which is about to 20,000 square meters, so imagine how big GEM is,” he said.

Enany explained that big ceremonies will take place in the upcoming period during the transfer of two highly important artifacts, which are the Tutankhamun mask and tomb, to GEM. “We will make a big ceremony for the mask and another for the tomb; we will attract the attention of the whole world to Egypt through its treasures,” Enany announced. He added that plenty of international news agencies and about eight international archaeologists specialized in Tutankhamun witnessed the procedures to transfer the chariot.