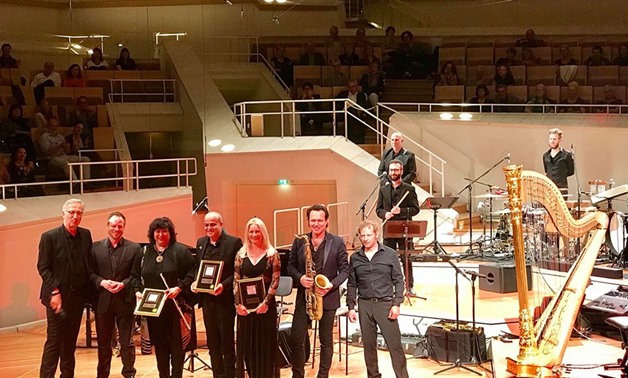 Abdel Dayem joined Cairo Steps ensemble during the honoring ceremony, which was attended by Egypt's Ambassador to Germany Badr Abdel Aati, Egyptian Cultural Counselor of the Egyptian Embassy in Germany Ahmed Ghannam, German officials, German and Egyptian musicians and an audience of around 1,200 people in the Philharmonic Salon in Berlin.

Abdel Dayem expressed her pleasure for the warm welcome she and the ensemble received, stressing Egypt’s significant position in the world of music and creativity.
“I dedicate this award to my country, 100 million Egyptians and audiences who have supported me since I began my art career,” she remarked.

Founded in 2002 as a collaboration between Egyptian oud player Bassem Darwish and German pianist Matthias Frey, Cairo Steps is an international Sufi-jazz world-music ensemble that merges and combines traditional Egyptian oriental grooves with modern jazz, classical and contemporary music. Their music style is unique as it is influenced by spiritual and ethnic music as well as European music traditions.

Quadro Nuevo is a German acoustic quartet founded in 1996, known for performing world music and jazz.