Screencap from the trailer for "Gomorrah", April 15, 2018 – Youtube/ ItalianTerror.

Director Matteo Garrone holds nothing back in showcasing the horrors of the criminal underworld; indeed, the basis of "Gomorrah" is a true story, from a non-fiction book of the same name written by Roberto Saviano. The title itself is a clever use of wordplay, drawing allusions to the Godless Biblical city and the very name of the organized crime syndicate the film focuses on; the Camorrah.

"Gamorrah" explores five separate stories following nearly a dozen different people, all of whom are connected by the insidious touch of organized crime. Rather than focus on the typical mob bosses or gangsters, "Gamorrah" explores the lowest ranks of crime, the nameless foot soldiers whose lives mean nothing to the people they serve. Centered in a region of Southern Italy called Naples, the film opens up with the brutal murder of various gangsters relaxing in a tanning salon as part of a turf war between the mob as it tears itself apart for control of the region.The only real rulers here are Drugs and Death.

Amongst the unfortunate stories told by this film is that of two teenage friends, Marco (Marco Macor) and Piselli (Ciro Petrone). Both of them dream of a better life, but their dreams only go as far as becoming mob bosses themselves. They both share a love of Scarface, but they soon learn that the reality of crime is nothing like the glamour of films. Even younger than them is Toto (Salvatore Abruzzese), a 13 year old delivery boy from a poor family who sees that the only way to a better future is in the crime surrounding him, but comes to realize too late the gravity of what he's gotten into after he joins the mob.

Higher up the food chain is the cruel and heartless Franco (Toni Servillo), a businessman operating an illegal scheme that involves the dumping of toxic industrial waste around the slums of Naples, leading to increasing rates of cancer and other diseases. Throughout the film what becomes clearly and readily apparent is the sheer lack of hope present; there are no heroes, there is no salvation. The Camorrah is a beast existing everywhere and anywhere. As soon as one of their soldiers is killed off, a naïve new recruit steps in to take his place and die, repeating the cycle endlessly.
"Gamorrah" won the "Grand Prix" award at the Cannes Film Festival. 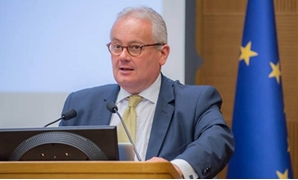