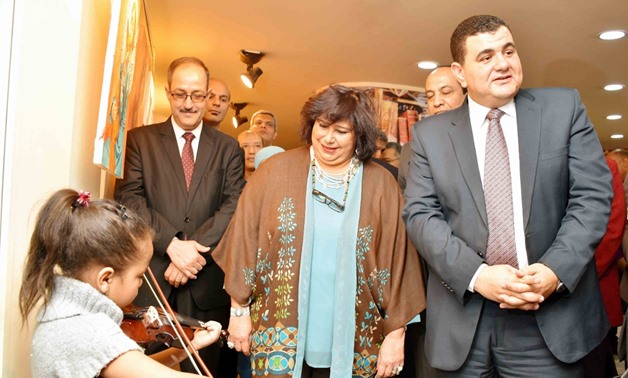 Minister of Culture, Ines AbdelDayem at the opening ceremony of three new halls at Dar El Kotob, -Photo courtesy of official statement by Ministry of Culture.

CAIRO – 28 March 2018: Minister of Culture Ines Abdel-Dayem inaugurated three arts and music halls for the blind at Dar El Kotob (House of Books) on Sunday, March 25. The inauguration was held in the presence of Ahmed Shawky, chairman of the National Book and Documentation House, and MP Khaled Hanafi. Hanafi pointed out that these halls contain 21,000 books, including audio books and Braille books for the blind.

The opening ceremony of the halls started with the screening of a documentary film tracing the steps of the development of the three halls. The film shows how the project began in 2008 until the stage of preparation and opening followed by presenting the Museum of Musical Instruments.

Minister of Culture, Ines AbdelDayem at the opening ceremony of three new halls at Dar El Kotob, -Photo courtesy of official statement by Ministry of Culture.

It also shows the activities hall, which includes rare recordings featuring the diversity of the Egyptian heritage arts and the process of digitization of heritage CDs using modern means. As for the third hall, it contains special devices to assist people with visual disabilities to use computers through specialized technical programs. The third hall also offers devices that facilitate printing texts for the blind.

One of the three halls will be welcoming any artworks by Egyptian artists in diverse knowledge fields, according to an official statement by the Ministry of Culture. This hall is considered to be an extension of the library founded at Dar El Kotob in 1950.