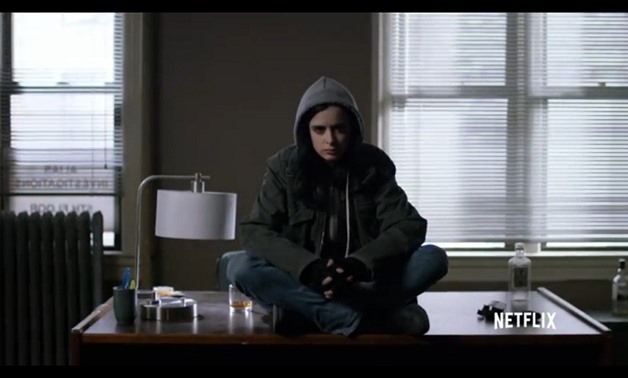 Screencap from the trailer for “Jessica Jones”, March 25, 2018 – YouTube/Netflix

Who is Marvel's ‘Jessica Jones’?

By: Nizar Ahmed
CAIRO – 26 March 2018: Marvel's “Jessica Jones” will be returning to Netflix with a third season, a fact sure to delight all fans of her show but also leaving everyone else wondering; who is Jessica Jones, and just how is she a superhero?

The answer begins in 2001, when Marvel Comics’ writer Brian Michael Bendis teamed up with artist Michael Gaydos to create the character for Marvel's branch of R-rated works titled "MAX Comics". She premiered in the comic book series "Alias" in November 2001, where readers are first introduced to Jessica's work as a detective operating in New York City, dealing with crimes often involving those with superpowers.

Born Jessica Campbell, the character's powers were "gifted" to her in the same event that led to the deaths of her parents, a chemical spill causing a fatal car accident. Jessica was left in a coma, but emerged with superpowers such as super strength, flight, enhanced speed and even some invincibility. It took some time before she would become a hero, but unfortunately, her short career as a superhero would end in tragedy.

Donning the name "Jewel", Jessica's stint as a superheroine was mostly obscure and minor, never reaching the heights of other characters. It took an encounter with an old, forgotten Daredevil villain named Zebediah Kilgrave, for "Jewel's" character to embark on a considerably more horrific direction; Kilgrave, once a former assassin, breathed in a strange gas that turned his skin purple and gave him powers of mind control. Using his powers for the not-so-good, he became the supervillain criminal known as "The Purple Man", and Jessica Jones became a victim of his sick mind control.

Subject to unimaginably cruel psychological abuse, Jessica was reduced to little more than a toy and a weapon for Kilgrave, acting out his desires as her free will was stripped away. This came to a head once she had a violent encounter with the Avengers, after being commanded by Kilgrave to hunt down Daredevil. The confrontation eventually put Jessica in another coma.

The incident left her scarred for life, both from the abuse she suffered under Kilgrave but also from the utter indifference from the heroes around her. Leaving behind the fancy name and costume, Jones took to the street to become a private detective. In the comics, her story does have a happier ending; she meets fellow street hero Luke Cage, who helps her deal with her past trauma and move on, eventually leading to a romantic relationship that sees them married and with a child.

In the Netflix series, Jessica is portrayed by Krysten Ritter, best known for her role in “Breaking Bad”, while her nemesis Kilgrave is portrayed by David Tennant of “Doctor Who fame”. Season one begins with Jessica investigating the disappearance of a student, which brings her back into Kilgrave's path and into danger.