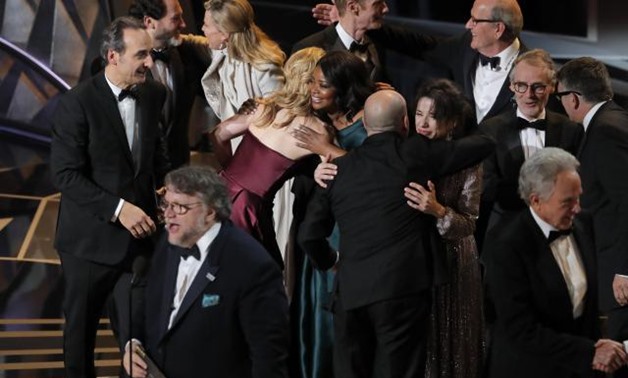 CAIRO – 5 March 2018: The 90th Academy Awards ceremony was held on Sunday at the Dolby Theater in Hollywood. The host was Jimmy Kimmel, who started by talking about the sexual harassment scandals that have rocked Hollywood recently.

“That’s the kind of men we need more of in this town,” Kimmel admitted while pointing to a colossal Oscar statue on the stage, explaining that the statue “keeps his hands where you can see them” and has “no penis at all.”

Later he started talking seriously about the #MeToo and Time’s Up movements, which started in Hollywood after the Harvey Weinstein sexual harassment accusations and have now spread across the globe. “The world is watching us,” he said. “We need to set an example.”

90th Academy Awards - Oscars Show - Hollywood, California, U.S., 04/03/2018 - Host Jimmy Kimmel and actors are shown on the big screen as they deliver candy to people in a movie theatre next door to the Dolby Theatre. REUTERS/Lucas Jackson

The 2018 Academy Awards was characterized by its diversity; the winners included a surreal love story, a Chilean drama, a violent cop drama and others.

The diversity extended to the ceremony’s event that ranged between seriousness and light-heartedness. The ceremony spent time acknowledging #MeToo and handing out hot dogs at an adjacent movie theater, but it managed to culminate in an obvious invitation of support, inclusion and diversity in the international cinema scene.

"I was a kid enamored with movies, growing up in Mexico. I thought this could never happen. It happens," Del Toro said during his speech. He described “The Shape of Water” as his first grown up movie. “The Shape of Water” is a fantasy romantic movie that highlights a love relationship between a mute janitor and a strange amphibious creature. This love story takes place during the backdrop of the Cold War.

Meanwhile, Gary Oldman won the award for Best Actor in a Leading Role for his role in “Darkest Hour”, while Frances McDormand received the Best Actress in a Leading Role award for her part in “Three Billboards Outside Ebbing, Missouri”. In his speech, Oldman thanked the film’s director and producers; Winston Churchill; his wife, Gisele Schmid; and his 99-year-old mother. Oldman said that his mother was watching on the sofa. “Put the kettle on,” he said. “I’m bringing an Oscar home.”


McDormand presented a dazzling performance in “Three Billboards Outside Ebbing, Missouri”, portraying a bereaved mother who is seeking justice for her murdered daughter, succeeding to convey a mixture of grief and a strong wish for revenge. During the ceremony, McDormand made a stand supporting gender equality. She thanked her sister and everyone in the ceremony, and then she asked that all the female nominees join her in the gender equality stand. “Look around, we all have stories to tell and projects we need financing,” she said. “If I fall over, pick me up, because I’ve got some things to say.”

Jordan Peele won the Best Original Screenplay award for “Get Out”. Peele succeeded in tackling racism in liberal white suburbs in the movie. This was Peele’s first Oscar nomination.

Sam Rockwell won the Best Supporting Actor for his performance as a police officer in “Three Billboards Outside Ebbing, Missouri”. He thanked all those who watched the movie.

Kobe Bryant won the Best Animated Short Film award despite allegations from the #MeToo movement that he was involved in a sexual assault in 2003.

“As basketball players, we’re supposed to shut up and dribble,” recounted Bryant, who thanked his wife and daughters.

Pixar’s “Coco” was named Best Animated Feature. The “Coco” song “Remember Me” also received the Best Song award. The song was written by Kristen Anderson-Lopez and Robert Lopez. “Not only are we diverse, but we are close to 50-50 for gender representation,” said Anderson-Lopez.

“A Fantastic Woman” was named the Best Foreign Film. The Best Documentary award unexpectedly went to “Icarus”, a Netflix film about systematic Russian doping in the Olympics. This award is the first for Netflix for a feature film. Netflix received last year’s prize for Best Documentary Short Film for “White Helmets”.

The Academy of Motion Picture Arts and Sciences tried as much as it could to keep ratings from falling, at the same time highlighting movies that have not been widely watched.

It also tried to strike a balance between the acknowledgment of sexual harassment scandals that Hollywood suffered from recently and providing an extensive look at the history of moviemaking to mark the Oscars’ 90th birthday.


Some mistakes occurred like those of last year, where “La La Land” was mistakenly named Best Picture instead of “Moonlight”. For the first time this year the Academy gave sound mixing and film editing serious recognition.

Celebrating the #MeToo and Time’s Up movements made for some gauche red carpet moments. “I want people to know that this movement isn’t stopping,” recounted Mira Sorvino, who came forward last year with allegations of sexual harassment against Weinstein. Time’s Up is an initiative started by Hollywood women and focuses on combating sexual harassment.

Ava DuVernay and Shonda Rhimes, who are involved in Time’s Up, explained the reason behind the absence of overt displays from the movement on the red carpet. “We are not an awards show protest group,” DuVernay recounted at a meeting with a small group of reporters last week. “We made a conscious choice not to do that again.”


The Oscar nominated the song “Stand Up for Something” from the movie “Marshall” was performed by singer Andra Day along with 10 distinguished activists, including Cecile Richards of Planned Parenthood; labor leader and civil rights advocate Dolores Huerta; Bana Alabed, the eight-year-old Syrian refugee who documented the siege of Aleppo on Twitter; and Janet Mock, a transgender activist, television writer and host.