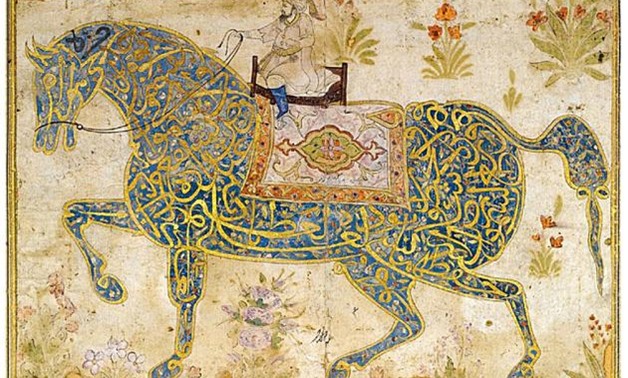 CAIRO – 14 February 2018: Arabic language is an ancient strong language that’s used by millions of human beings and also one of the most expressive languages when it comes to literature, but the artistic value of this language is huge and also portrayed through Arabic Calliagraphy as one form of art. Arabic Calligraphy is the art of Arabic language writing, which has started back in the first century with the reveal of Islam in the Muslim’s holy book Al-Qur’an.

The Arabic calligraphy had a great impact in the improvement of arts all over the world, as it has influenced cultures such as Andalusia in Spain and more, plus it has been the main influence in multiple art styles such as the Baroque and Rococo art styles in Europe, and also the fusions resulted from many cultural exchanges between the Islamic art world and other ancient cultures such as the Chinese culture which helped a lot in presenting brand new styles as an output from this collaboration.

All of these reasons have highlighted the importance of Arabic Language calligraphy, besides pushing many entities nowadays to fund and support that unique art style teaching, and encouraging many universities to make Arabic calligraphy studies a priority in any art university.

One of those universities is the Goldsmiths University of London, which is about to launch a new developing program called “Language in Art and The Work of Ali Omar Ermes”, the project is supported by the Qatar Foundation International, British Museum and the Museum of London, and it aims to add a new resource of Arabic learning that considers the development of art work at the first place and the language along with it according to an article published by the Goldsmith University of London.

The program depends on a one class session in which different styles of Arabic calligraphy are taught through the works of Ali Omar Ermes, that session will tour the United Kingdom, as for now it has been assured that this program will be applied in Edinburgh, Leeds, Sheffield and London, also the program will include a workshop to encourage student collaborations and creative engagement.

Ermes is a Libyan calligrapher that has studied in England, as he got his diploma from Plymouth School of Architecture and Design and later the Central Saint Martin College of Arts and Design. He relied on drawing Arabic letters and literature phrases and for that unique vision he’s active in many cultural institutions and he’s the chairman of the Muslim Cultural Heritage Center in London.