Artefacts from Saqqara storehouses to be shown in EM, GEM 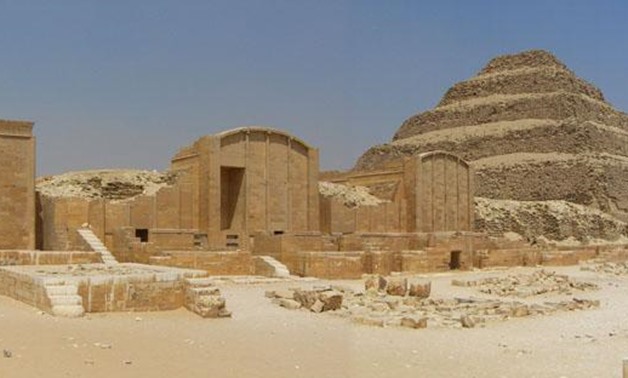 CAIRO – 12 February 2018: Secretary General of the Supreme Council of Antiquities Mustafa el Waziri visited Saqqara archaeological storehouses on Sunday, February 11, to select some artefacts to exhibit for the first time at the Egyptian Museum in Tahrir and the Grand Egyptian Museum (GEM).

Waziri explained that a number of false doors, offering tables, and wooden painted coffins, as well as other distinguished artefacts were chosen from the Saqqara archaeological storehouses to be exhibited within the museum display.


The Egyptian Ministry of Antiquities is currently working on the maintenance and restoration of Djoser Pyramid located in Saqqara.


The projects sector of the Ministry of Antiquities previously announced that it has almost completed the restoration work of the Djoser Pyramid; the pyramid will inaugurate very soon.


Renowned Egyptian archaeologist Zahi Hawas followed up on the restoration works carried out at the Djoser pyramid in an effort to consolidate the 4,600-year-old monument against time. The Djoser pyramid is the first stone structure in history built by King Djoser, a king from Egypt’s Third Dynasty.


The cabinet decided to allocate LE 15.3 million ($845,309) to support the restoration and maintenance of the pyramid. The process had stopped in 2011, after the UNESCO report issued in September of the same year stated that the pyramid’s exterior facades suffered from lack of maintenance over the centuries.


Additionally, the removal of the dirt blocks from the pyramid's body led to the creation of many large cavities in several areas, as well as the appearance of many blocks hanging without pillars to support them.


The report also confirmed the existence of some problems in the restoration work. Later, rumours spread that the pyramid was removed from the World Heritage List.


The restoration work on the pyramid began in 2006 and was scheduled for completion in 2009. But fears for the safety of the pyramid increased after the UNESCO’s report, which acknowledged that many irregularities occurred due to the work of the maintenance company; hence, all restoration work has stopped since then.


These irregularities were technical, particularly in the use of limestone to plug the openings that emerged in the pyramid's body, leading to the distortion of the pyramid's external shape. Also, the excessive load on the pyramid became a threat.

It is worth mentioning that an Old Kingdom tomb was discovered in the Western Cemetery located in the Pyramids area in Giza belonging to an ancient Egyptian woman named Hetpet, as announced on Saturday, February 3 by the Egyptian Minister of Antiquities Khaled Anany.

Hetpet was a woman with a high social position in ancient times: a top official in the royal palace during the end of the Fifth Dynasty. Hetpet has a number of cognomens, among which is the priest of the goddess Hathour.


Hathour is a Pharaonic goddess who symbolizes the principles of joy, feminine love, and motherhood. Waziry announced that Hetpet played important roles at that time, especially in the agricultural field.
The newly discovered tomb of Hetpet has the architectural style and decorative elements of the Fifth Dynasty, with an entrance leading to an L-shaped shrine with a purification basin.


On its western rear end, there is a rectangular arcade lined with incense and offering holders. There is also a naos with a missing statue of the tomb’s owner. The tomb has very distinguished wall paintings in a well-conserved condition, depicting Hetpet standing in different hunting and fishing scenes or sitting before a large offering table receiving offerings from her children.


The tomb contains a group of dazzling inscriptions portraying rare, gripping scenes like a monkey dancing in front of a complete musical troupe, a sailors’ fight, hunting birds, and fishing, among others. All the inscriptions’ colours are very clear and bright.


Scenes of reaping fruits, melting metals and the fabrication of leather and papyri boats as well as musical and dancing performances are also shown on walls. Among the most distinguished paintings in the tomb are those depicting two monkeys in two different positions.


Monkeys were domestic animals at the time, so similar scenes are found in other tombs. The first one is painted on the wall of a 12th Dynasty tomb of Khnoum Hetep II in Beni Hassan, Minya Governorate and the second is found in an Old Kingdom tomb of Ka-Iber in Saqqara displaying a dancing monkey before an instrument as opposed to an orchestra.