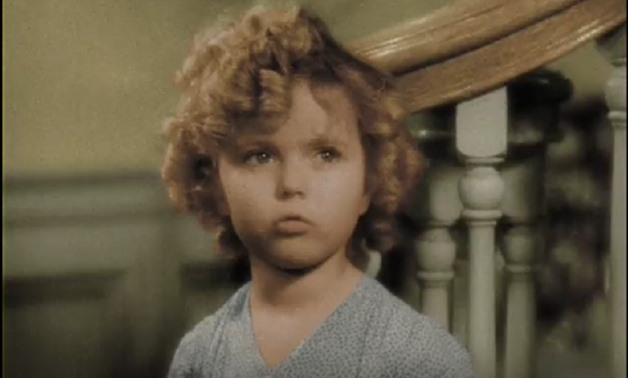 Screencap of Shirley Temple in the film 'The Little Colonel', Feburary 10, 2018 -mysticmoon1984/Youtube

CAIRO – 10 February 2018: February 10, 2014 is the day beloved actress and humanitarian Shirley Temple passed away at the age of 84. Best known as an immensely popular child star during the Great Depression, Temple went on to become a diplomat for the United Nations.

Her life started on April 23, 1928 in Santa Monica, California. The daughter of a banker, her housewife mother was the one who encouraged Temple to act. She began as soon as she turned 3 years old, when she starred in “Baby Burlesks” – short, one-reel comedy films about children acting like adults. Seeing a potential star in their grasp, Shirley's parents seized the chance to capitalize on her skills, with her father becoming her agent.

Soon enough, little Temple eventually landed a breakthrough role in 1934 with "Stand Up and Cheer!", a musical comedy film released during the height of the Great Depression. In a time when the country was at its most hopeless, Temple was a ray of light and hope. She quickly landed numerous roles throughout that busy year, such as the smash hit "Little Miss Marker" and "Carolina", but it was "Bright Eyes" that transformed her into a superstar.

It was a role made specifically for the young actress. She sang one of her most famous songs, "On the Good Ship Lollypop", and her role was so critically praised that she was even awarded her own special Oscar award the following year. Some of her other more popular performances included 1937's "Heidi", an adaptation of the beloved 1880's children's book.

A little girl had managed to become one of Hollywood's most famous actors and had reportedly saved an early 20th Century Fox from going bankrupt. She was Hollywood's biggest attraction – her joyful youth and radiant charm being a necessary escape from the harshness of the era. President Franklin D. Roosevelt even dubbed her "Little Miss Miracle" for helping to lift the nation's spirit.

Temple was such a phenomenon that she even became one of the earliest actors to have merchandising made of them. Her face could be found everywhere – from photographs, hats, mugs, clothes and dolls made in her likeness. She'd even given the King of Hollywood some fierce competition too.

Unfortunately, it wasn't to last; Temple couldn't be a child forever.

By 1940, Shirley had just begun puberty, and it was clear that her childish charms were soon going to fade. She still attempted acting and starred in 1940's "Blue Bird", a commercial failure. Her contract with Fox had ended, and Temple's future in Hollywood was bleak. She found a bit of success in television and even got her own show, "Shirley Temple’s Storybook", which ran for two years from 1957 until 1959. It was followed up by the "Shirley Temple Show" in 1960, but it failed to attract an audience.

Temple retired from films when she was only 21.

She sought to reinvent her image and decided to pursue her life in the direction of politics. She unsuccessfully ran for a seat in the U.S. House of Representatives during 1967, and from 1969-1970 was a delegate for the U.N. General Assembly. After publically coming out about her breast cancer diagnosis in 1972 – the first celebrity to ever do so – she then became the U.S. ambassador to Ghana from 1974 until 1976. In 1988, she was the only person to achieve the honorary rank for U.S. foreign service officer, and from 1989-1992 once again served as an ambassador, this time for Czechoslovakia.

Temple's achievements as an actress would not be forgotten, however. She was awarded a Lifetime Achievement award from the Screenwriter's Guild in 2005.