Story of Colossi of Memnon 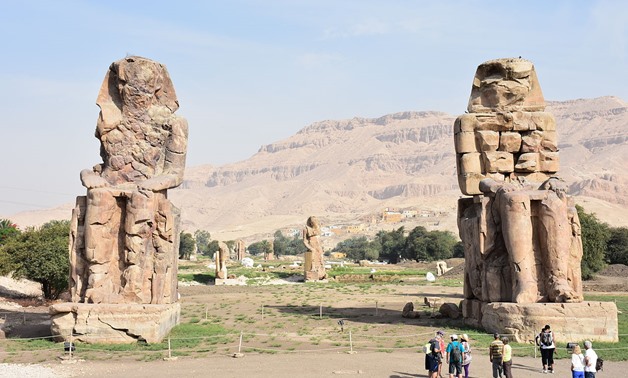 CAIRO - 25 January 2018: Their singing and twittering filled the sky centuries ago, until their voices stopped due to renovation works done by Roman Emperor Septimius Severus (193-211).

Known as the singing statues or “The Vocal Memnon”, the Colossi of Memnon are two great seated stone statues representing King Amenhotep III, according to prominent historian and author Bassam El Shamaa’.

Decorated with imagery of his mother, his wife and the God Hapi, the statues are 18 meters high and 720 tons each, and both are carved from single blocks of sandstone, according to Greek researcher and author Joshua J. Mark.

“They were constructed as guardians for Amenhotep III's mortuary complex, which once stood behind them,” Mark added in his article published on Ancient History Online Encyclopedia.

Although the statues were dedicated to King Amenhotep III, they were known as the “Memnon Statues” or “Vocal Memnon”. The reason for this name is the mythical link between the statues and a number of Greek myths related to Agamemnon, Homer’s Iliad hero.

In 27 B.C., a fierce earthquake in Luxor caused severe damages to both statues. Moreover, many cracks appeared in both statues’ sides – hence why strange sounds are occasionally heard due to wind passing through the cracks.

The Greek residents and tourists in Egypt believed that the statues’ sounds symbolized Agamemnon singing and oracles to his mother Eos, Goddess of Dawn.