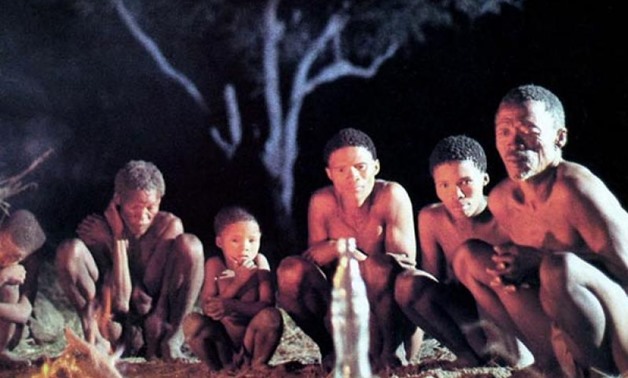 CAIRO- January 23: The South African film “The Gods Must Be Crazy” (1980), directed by Jaime Uys, is scheduled to screen at Cinema Daal on Wednesday. The film will be shown with Arabic subtitles.

“The Gods Must Be Crazy” is the most commercially successful South African film so far, earning over $100 million worldwide.

The film is set in Botswana, where it follows the experiences of a bushman named Xi from a tribe isolated from the modern world living in the Kalahari desert. Bushmen, or the San people, are indigenous hunter-gatherer peoples who live in the southern parts of Africa.

When a coca-cola bottle falls out of an airplane unbroken, the people of Xi’s tribe assume it is a gift from the gods, and use it in different ways. Soon however, they begin to fight over it, which compels the village elders to send Xi on a pilgrimage to dispose of the bottle, far away from the tribe.

On his journey, Xi meets different people from the unknown part of the world, and goes through many life-changing experiences through his encounters. Some of the people he meets include an eccentric biologist, a village school teacher originally from the city, a band of guerrillas, and a tour guide and his assistant.

The film observes the trends and practices prevalent in the twentieth century from the eyes of an “outsider” who knows nothing of that world.

Nǃxau ǂToma, the actor who played the role of Xi, is a real bushman of the San tribe, who had no previous experience of “modern life” before his role in the film. Nǃxau spoke three languages fluently, and was known to be a natural actor. Because of his lifestyle as a member of the San tribe, where there was not much value for material things like money, Nǃxau barely used his earnings, allowing most of the money to “blow away”, according to Namibian legend.

“The Gods Must Be Crazy” stars Nǃxau ǂToma as Xi, Marius Weyers as Steyn, Sandra Prinsloo as Kate Thompson, and Louw Verwey as Sam Boga. The film was awarded “Most Popular Film” at the Montreal Film Festival in 1983 and the “Best Foreign Film” award at the 1985 Young Artists Awards. It is followed by a less successful sequel in 1989.