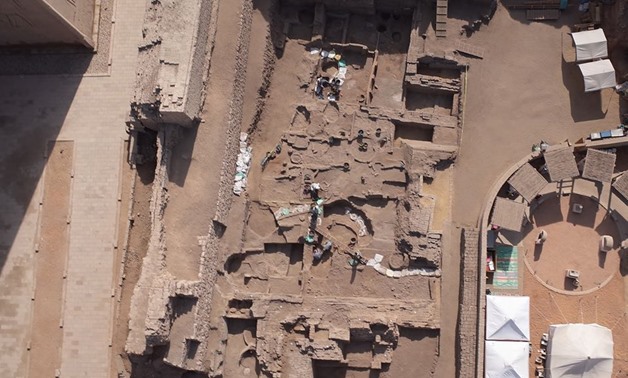 The unearthed administrative complex – Photo courtesy of the Ministry of Antiquities

CAIRO – 11 January 2018: The Egyptian-American archaeological mission from the University of Chicago uncovered an administrative complex, dating back to the late Fifth Dynasty, during excavation works carried out in Tel Edfu site, according to the Ministry of Antiquities Thursday.

Secretary-General of the Supreme Council of Antiquities Mostafa Waziri said that the administrative complex is the oldest archaeological evidence found in Tel Edfu site until now, proving that the site still has many uncovered antiquities.

Mueller revealed that the mission, headed by Dr. Nadine Mueller and Dr. Gregory Marward, began excavation works since 2014, but the complex is newly discovered. She added that the complex highlights the royal expeditions organized during the Fifth Dynasty. Its buildings, she added, were used as storehouses for the products and goods of these expeditions that were sent by the king to extract minerals and precious stones from the eastern desert.

Marward further remarked that artifacts were found inside the complex, including 220 mud brick stamps of King DjedKare Isesi, the names of workers who participated in excavations and mining works, fragments of mining activities, shells from the Red Sea and Nubian pots.

Regarding the artifacts uncovered during the dewatering project in Kom Ombo temple, Head of the Egyptian Antiquities Sector at the Ministry of Antiquities Ayman Ashmawi pointed out that it is a limestone statue of a man and his wife representing offerings to a seated deity who lost his legs.

The unearthed artifacts – Photo courtesy of the Ministry of Antiquities