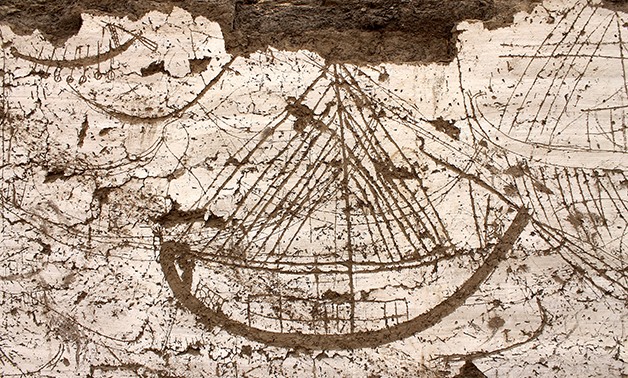 CAIRO – 23 February, 2017: Archaeology, particularly focused on ancient history, is a very precise science that shies away from concrete proclamations. Archaeologists must navigate ancient remains of often lost civilizations, whose histories are pieced together in an incomplete tapestry. Archaeological discoveries often seem minor to the casual observer, yet to an archaeologist, even the smallest findings can alter our understanding of the past.

A 3,800-year-old chamber unearthed beneath the sands of Abydos contains a dearth of minute, yet seemingly telling details. The chamber contains some 120 boat etchings ranging from simple outlines of a hull to detailed incised drawings of ships with oars, sails and crew, National Geographic

Back in November archaeologists from the University of Pennsylvania unearthed what they believe is a royal burial boat tomb replete with ships etched into its walls. The astounding discovery is helping archaeologists better understand how funeral rites of the 12th dynasty Pharaoh Senwosret III were carried out.

There are many mysteries surrounding ancient Egyptian history and culture, which archaeologists hope discoveries such as these will help answer.

Including a ship in a pharaoh’s burial tomb is believed to have been common practice, until shortly after Senwosret III’s reign. Archaeologists have yet to find a conclusive reason as to why this became less prevalent, the University of Pennsylvania

The commonly-held belief is that pharaohs over time were drawn to the notion of a hidden burial tomb, and by the dawn of the New Kingdom era pharaohs chose to bury their tombs in the Valley of the Kings without funerary boats, National Geographic explained.

. The structure itself was discovered in 1901-1902 by a British archaeologist. According to National Geographic, the structure’s vaulted ceilings collapsed during an excavation attempt, after which it remained untouched.

shed light on its ancient and far-reaching history. Given the fact that such discoveries provide but small glimpses into a civilization that existed thousands of years ago, it is tempting to fill in the blanks with far-fetched and unsubstantiated theories.

The relative scarcity of written records, coupled with the complexity of archaeological research, has prompted scientists and archaeologists to be conservative in their proclamations. As new relics are unearthed that help shed light on differing time periods and topics, commonly-accepted theories are

to reflect these changes.

What may often seem like trivial discoveries to casual observers, such as

porous bones in the remains of children

, can be an indicator of larger problems in a region at a given time. Climate change, disease, famine and wars can often be glimpsed in the remains of ancient civilizations.