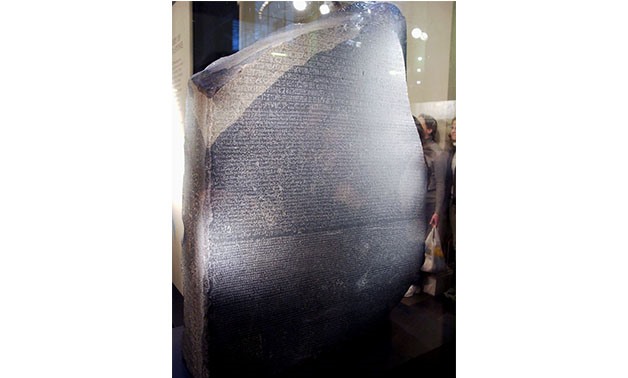 CAIRO – 20 November 2017: Egypt celebrates 200 years since the discovery and decoding of the Rosetta Stone in Egypt through several cultural activities held across the country for three consecutive days, starting Sunday.

Carried out under the theme of “Rashid, Egyptian-French Historical Relations Watcher”, the celebrations were held at Damanhour University in Beheira, according to a released statement by the Ministry of Antiquities.

The director of the Department of Coptic and Islamic Antiquities Mohamed Abdel Latif has explained during the celebration that the government is focusing on upgrading megaprojects such as developing the area where Rashid is located to a museum for Islamic heritage.

This comes in parallel to the ministry’s plans to develop the city into a touristic destination, according to Abdel Latif.

Emphasizing the Ministry of Antiquities’ vital role, Abdel Latif reviewed the ministry’s efforts in qualifying the city to become an international touristic site. Besides, to commemorate the decoding of the stone, descendants of discoverers and members of the French Campaign have attended the celebration, including that of Francios Champollion, the stone’s discoverer Pierre, and the leader of the French Campaign in Egypt General Menou.

Located currently at the British Museum in London since 1802, the stone was found in 1799 by an officer in the French military campaign in Egypt. Ancient Egyptian hieroglyphics, Egyptian demotic and ancient Greek inscriptions praising King Ptolemy V are carved onto the stone.

The French Egyptologist Champollion succeeded in cracking the Rosetta Stone’s code using his knowledge of ancient Greek. Egyptologists have later worked on studying the stone with the aim to expose in depth details of ancient Egyptian history.