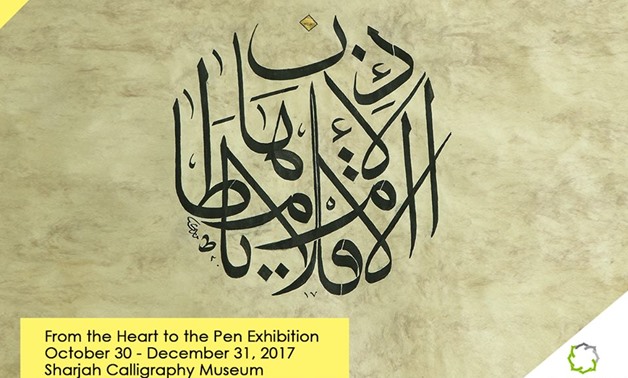 CAIRO – 1 November 2017: The Sharjah Calligraphy Museum unveiled the new exhibition "From the Heart to the Pen," on Monday, October 30; the exhibition will run until December 30.

"From the Heart to the Pen" is primarily focused on Al-Muhaqqaq script, an 11th century form of Arabic calligraphy that had been in use for over 200 years until its decline. The exhibition comprises over 34 collections of religious texts, sayings and poetry compiled by Jordanian academic and artist Nassar Mansour and his British student Sir Mark Allen.

Mansour is regarded as one of the Arab world’s most influential calligraphers and was influential in bringing the script back to life. He published books and papers on Muhaqqaq, and wrote a 2006 academic study that detailed the origin, history and development of the script.

Muhaqqaq is one of the six classical scripts in Arabic calligraphy and was once highly regarded as being amongst the most beautiful. It took great care to write in it, and was associated with the writing of Quranic manuscripts, and as such required an immense amount of difficulty to ensure the highest quality.