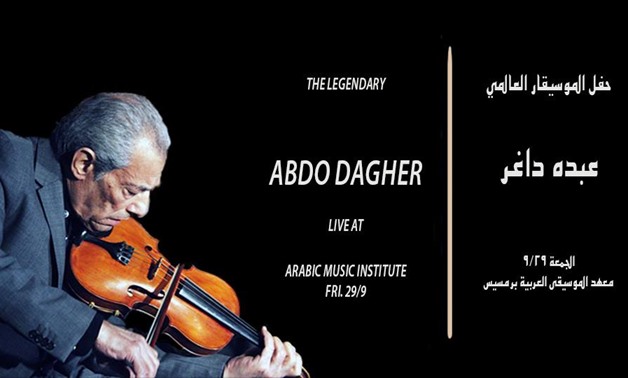 CAIRO – 24 September 2017: The composer and violinist, Abdo Dagher, will perform a concert at the Arabic Music Institute on September 29 at 8 p.m. to celebrate the first anniversary of the establishment of the Oriental Violin House at the Institute.

Dagher was born in 1936, in Tanta. His father, a professional musician, owner of a musical institute, and the manufacturer of oriental music instruments in Tanta; taught him to play the violin.

He first worked with a band in Tanta; then he moved to Cairo in 1955 where he worked with legendary singers Umm Kulthum and Mohammed Abdel Wahab.

His musical compositions are a mixture between oriental and western music.

The Arabic Musical Institute was established in 1914 by Egypt’s King Fouad I, under the name "Royal Institute for Arabic Music" at first, to preserve the Arabic musical heritage that was neglected at that time.