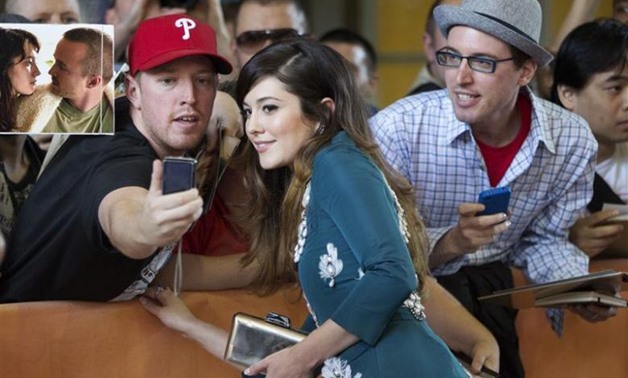 Mary Elizabeth Winstead poses for a picture, while a fan displays a photo at the gala presentation of the film "Smashed" at the 37th Toronto International Film Festival, September 12, 2012. REUTERS

TORONTO - 7 September 2017: A tale of real-life rivalry on the tennis court kicks off the Toronto International Film Festival on Thursday in a scaled back line-up of movies that focus on tales of survival amid chaos.

"There is a fascination with people at the top, people who have sacrificed everything," Toronto film festival chief executive, Piers Handling, said in an interview.

"Borg/McEnroe" is not the only film getting a Toronto showcase whose drama plays out on the tennis court. Emma Stone, in her first movie since winning an Oscar for musical "La La Land" in February, plays Billie Jean King as she fought 1970s sexism and faced off against Bobby Riggs (Steve Carell) in "Battle of the Sexes."

The Toronto festival has become one of the most important stops for filmmakers looking to showcase their work in the long Hollywood awards season that culminates with the Oscars on March 4.

This year the number of feature films has been trimmed to 260 from around 300 in 2016, the largest slate of any film festival.

Other movies featuring personal struggles include the world premieres of "Stronger", starring Jake Gyllenhaal as a man who lost both his legs in the 2013 Boston Marathon bombing, and "Kings" in which Halle Berry plays a woman trying to protect her brood of children during the 1992 Los Angeles riots.

"The whole notion of survival was for me the overwhelming theme," said Handling. "It's very much a reflection of the uncertainty and instability of the world right now."

Movie stars aren't the only celebrities expected at the 10-day festival, now in its 42nd year. Lady Gaga will be performing in Toronto to showcase the new "Gaga: Five Foot Two" documentary about her, while British guitar player Eric Clapton is celebrated in the film "Eric Clapton: Life in 12 Bars."