By: Arwa Ezz-eldeen
CAIRO – 17 August 2017: Professor Ayman el-Ashmawy, Head of Egyptian Antiques Sector, explained that a Central Department of Museum Stores’ report was submitted to identify 32,638 missing antiques so INTERPOL and other relevant bodies for recovery can track them. The report also aims to find a list of all deficiencies and losses over the past 10 years.

Saed Shalaby, Head of the Central Department of Museum Stores, confirmed that this report is a result of inventory that the department carried out in the last few months. More than 95 percent of mentioned numbers are antiques that were never in the ministry stores.

The lost pieces have been missing for more than 50 years. The most recent were pieces that were stolen during the state of security chaos that prevailed in the country in the wake of the January 25 revolution, and one robbery incident in 2015, where the offender was arrested and all pieces were recovered.

Shalaby pointed out that this has been confirmed by technical inventory committees of the Supreme Council of Antiquities over the previous years, and the necessary legal procedures were undertaken with the concerned legal and judicial authorities at the time.

He also stressed that this database aims to inventory all lost antiques from over 50 years ago, to follow what has not been recovered and addressing the security authorities locally and internationally. 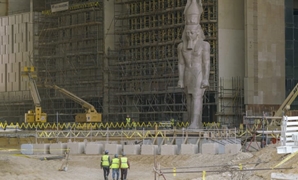