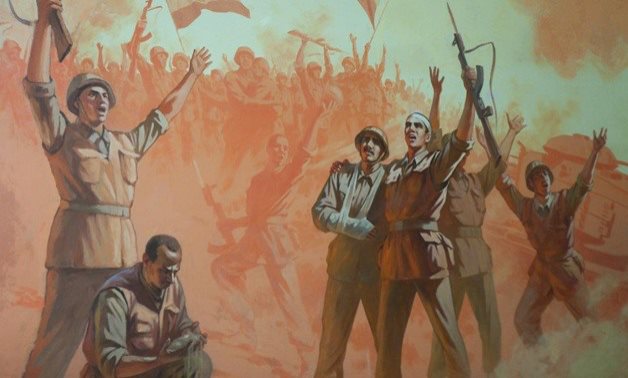 CAIRO – 6 October 2022: Reading or watching films about the 6th of October War in 1973 provides only a background on the war, and nothing short of visiting sites of battles past can really give you a sense of what the war was like. Egypt Today has compiled a brief guide of places to visit that reminds us of the wide-scale patriotism, power of deterrence and the military’s victory. This place is located about 20 kilometers to the southeast of the Suez Canal after passing through Ahmed Hamdi Tunnel to reach the Sinai Peninsula.


It was used by the Israeli army as a stronghold during their occupation of Sinai in 1967. The Israeli army built this checkpoint secretly under the ground along the Suez Canal to hide their weapons firing invisibly at Sinai and Suez Canal cities.


The Egyptian forces recaptured part of the occupied lands in October 1973 after fierce battles between the two sides.


After 44 years of war, the place, used as a shrine, remains distinctive with its mountains surrounded by desert. Visitors could take tours through the tunnels of the stronghold where weapons, operation rooms and some properties of Israeli soldiers were found.

Three kilometers to the North of Ain Musa is the Military Touristic Memorial created by the Egyptian army to commemorate their victory over the Israeli army.


It hosts some sections of the Bar Lev Defense line, which Israeli built to prevent the Egyptian army from entering Sinai, in addition to a number of weapons, tools, equipments, tanks, and photos that the Egyptians captured after the victory in 1973. This museum brings back many memories of battles on the canal especially the tripartite aggression of France, Britain, and Israel on the city of Port Said. It is divided into three halls with toy soldiers, military tools, gun and Israeli tanks displayed to document the 1956 Suez Crisis, the 1967 and 1973 wars with Israel and the 6th of October War.


In its gardens, a few captured US tanks carrying the Star of David painted on them and an old collection of unexploded ordnance are on display.

The Port Said Museum was opened to the public in 1964, eight years after the victory against the tripartite aggression of 1956.

The rifle-shaped memorial is located at the western bank of Suez Canal in Ismailia governorate at the left side of the passenger ferry. It has a perfect location as it overlooks Lake of Timsah (Crocodile Lake) and the historic houses in French style.


Inaugurated during the anniversary of the 6th October War in 1992, it has displays from the 6th of October Panorama in Heliopolis, Cairo.

The panorama includes scenes from the war, the plan to cross the Bar Lev line, armored vehicles and soldiers with signal weapons. The panorama also includes a photograph of a soldier from a medical service carrying the photo of the soldier Mohammed Abdel Atti who is said to have singlehandedly taken out 26 Israeli tanks.


A huge photograph of the first soldier raising the Egyptian flag on the eastern bank of the Suez Canal after the crossing is also on display. The museum is located on both sides of the ancient road to Ismailia, where many battles took place between the Israeli forces and Egyptian People’s Defense Forces.


There are five Israeli tanks around the museum destroyed by Egyptian armed forces and People’s Defence Forces during a battle named Abu Atwa in 1973. During the war Israel had tried to cut off the Cairo-Ismailia road.


In addition, the museum includes a marble memorial on which the names of Egyptian soldiers killed in battles were engraved, as well as light weapons used by popular resistance. Tabat el Shagra is located 10 kilometers from the Ismailia governorate.


It is a historic place where Israel constructed 18 fortified positions along the Bar Lev line enabling Israelis to monitor the western Suez Canal region. It was named as Tabat el Shagra (high ground tree-shaped) as this region is above sea level and has artillery roads shaped like tree branches. Egyptian forces seized it during the 1973 October War.


At the entrance of this historic place, a painting was found describing how the Egyptian forces could seize Israeli strongholds in the Bar Lev line including Tabat el Shagra region.