The Traveling 'Red Dress'.. Stitches Giving Platform to Those With None 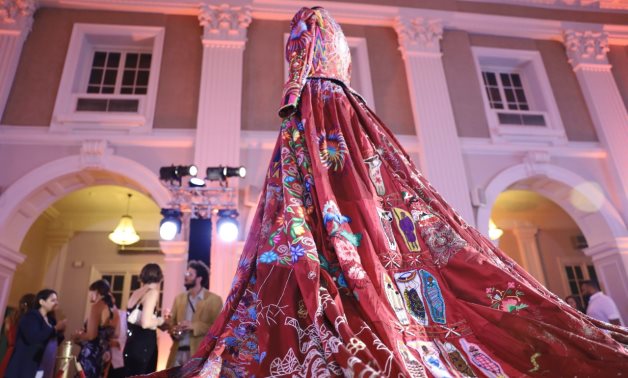 CAIRO - 30 September 2022:  Colorful intricate stitches carefully woven into a dress similar to none, I contend, for within its knitted embroidery dwells the stories of 353 artisans from around the world narrating the tale of a dream turned a reality. It is a vision of unity, togetherness and peace conceived by British artist Kirstie Macleod.

The Red Dress project started in 2009. Throughout the 13 years that followed, the unique garment embarked on a global journey that has seen some of its burgundy silk dupion pieces travel to 47 countries to be embroidered by 346 women and seven men, among whom 50 Bedouin women from the kind land of St. Catherine city in Sinai. As the dress traveled, it became like a periphery outside centuries-old temples, an everlasting gateway to heartfelt tales by women of whom you probably would not have heard had it not been for this dress, which carries not only their collective personal cultural identity, but also their laughter, tears, heartbreak, love, hopes and dreams.

“As I grew older, I became very concerned with the inequalities I was seeing with the treatment of women. So, I wanted to create a piece of work that would draw together as many different identities and voices to one united piece without prejudice... so they can tell their own story”, Kirstie adds.

And as the garment moved from one country to the next, it accumulated through its threads and beads the weight of precious human experiences, giving a platform to strong women who have used their embroidery to rebuild their lives, support their families and reshape their future.

"We came together, girls, married women, singletons, and widows to embroider spring flowers on kirstie's piece of fabric. You know some people are in need, and embroidery helps us put food on the table and we thank Allah almighty for everything,” softly says Zaida Mohamed from under her face cover. She is one of the 50 Bedouin women Selema Gabali asked to work on the dress.

As an Egyptian, it was my first time to hear of Selema Gabali, founder of FanSina organization for Bedouin handcrafts, who was contacted through Rachel Daves -a mutual friend of kirstie's- to take part in the project. Selema’s story is as unique as the dress; she is someone who believes in the power of her dreams despite the remote patriarchal society from which she comes. She was able to empower hundreds of Bedouin women in St. Catherine through her almost two decades of work.

“I wanted to tell the world what Bedouin women are capable of… not only are we giving life to our heritage, but we are also reinventing it… embroidery has supported so many households and made the world see the women of this city differently,” proudly says Selema. Selema’s story and that of the 50 Bedouin women shall live for as long as this dress. The project’s website documents the stories of the women and artisans who contributed their embroidery. Among those incredible women are Congolese widows and orphans who suffered the loss of loved ones due to ongoing war atrocities, yet have found “life, solidarity, trust, dignity, pride, love, friendship, joy, liberty and peace” in embroidery.

These were the words colorfully knitted on their piece of the garment, which will always carry their “laughter,” as kirstie said they were always laughing when gathered to work on the dress.

Also, the dress carries the stories of Palestinian, Syrian and Ukrainian female refugees who have found solace working on a garment carrying the energy of everyone who came across it.

There was a moment, narrates Krisitie, when Rahma, a 16-year old Bedouin, wore the dress in St. Catherine, then women started dancing around the garment, as if performing a ritual to bless it with their agility, nurturing femininity and kindness.

These stories shall live on.

Even though the creation journey was completed in March, the 6.2-kg silk Red Dress will embark on another journey carrying the individual stories and collective voices of those who created it.

“It porbably has 10 years of exhibitions ahead of it,” says kirstie.

What this dress has reminded me of is that dreams are beautiful, yet there is no dream more noble than one which unifies in an age of isolation, shines healing light where there is  heartbreak, brings people together despite borders and boundaries, and redefines accumulative slow success in a world where patience is no longer a virtue.