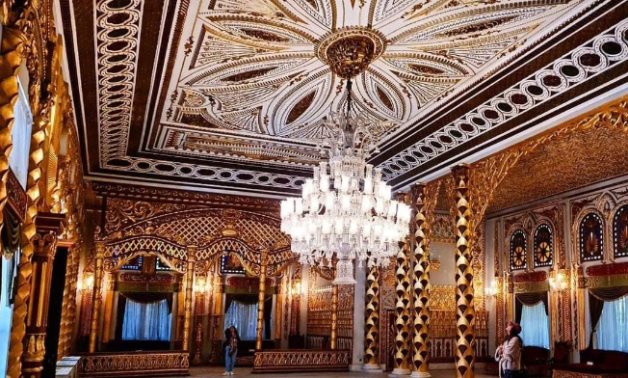 CAIRO – 29 September 2022: Prince Mohammed Ali Museum [Manial Palace] displayed some of the unique possessions of Prince Mohammed Ali Tawfiq, including a collection of well-preserved stuffed animals originally housed in the Hunting Museum, in celebration of the 200th anniversary of deciphering the Rosetta Stone and the emergence of Egyptology. The Nile crocodiles received special treatment from the ancient Egyptians, who worshiped the crocodile deity Sobek and embalmed tons of small crocodiles. Sobek and his reptiles were located in Fayoum, a place that enjoyed immense popularity in the Greco-Roman period (332 BC - 395 AD).

The crocodile cemetery in Fayoum, especially the town of Tabtones, contained thousands of mummies, according to reports by daily.jsto website. The sheer number of crocodile mummies found meant that they were numbered in thousands.

Early Greek and Roman sources, such as those attributed to Herodotus, focus heavily on the care that the Egyptians paid to their crocodiles.

Written evidence for crocodile conservation is scarce, but evidence for other sacred animal husbandry programs is abundant. Sobek temples possessed a great deal of land in their own right, so it is possible that some of them were designated to breed crocodiles.

A wonderful discovery was made in Fayoum, where nearly ninety crocodile eggs were discovered buried in deep pits. These were to set be sacrificed, embalmed and sold to worshipers in the temples. Another displayed animal was that of the deity Bastet. Bastet, one of the deities of the ancient Egyptians, was worshiped as a gentle cat. She was merged with the goddess Sekhmet in the modern state, where Sekhmet is represented in the form of a predatory lioness.

The city of Bubastis (Tel Basta) was the center of her worship. The spectacular drawings depicted her in the form of a woman with a cat's head. Bastet was considered the deity of tenderness and meekness, as it was closely associated with women.

Egyptians cherished their relationships with cats and when any of them died, they mummified them and made statues for them from various stones and metals.

A cemetery was found that contains thousands of mummified cats with brilliant precision, which indicates the importance of cats in ancient Egypt. The falcon Horus was also one of the displayed animals. Horus, was one of the most popular deities in the ancient Egyptian creed. He was the son of Osiris and Isis.

Horus took revenge on his uncle Set, the god of evil, who killed his father Osiris. The Egyptians usually portrayed him in the form of a falcon or a human with a falcon head. Horus was worshiped in many areas and was symbolized by many deities.

It is worth noting that the Prince Mohammed Ali Museum in Manial is one of the most beautiful and important historical museums in Egypt. It represents an important period in the modern history of Egypt. It is characterized by an architectural design in the modern Islamic style, in the manner of the Mamluk Persian Art School. It contains some Syrian, Moroccan and Andalusian decorations, blended with a prevailing Ottoman spirit.