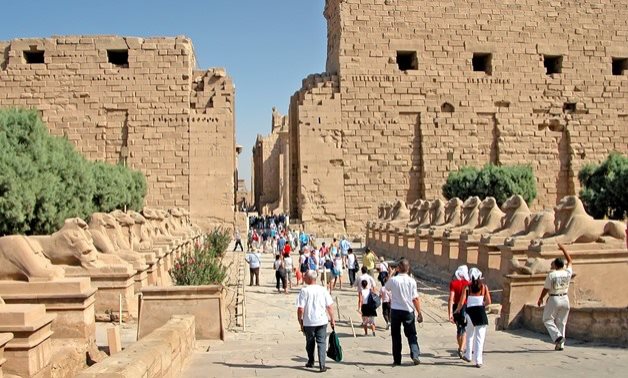 CAIRO – 30 August 2022: The banks of the Nile in Luxor are filled with so many marks of Egypt's illustrious past that the area is called the largest open-air museum in the world.

Luxor was once ancient Thebes, the former capital of Egypt, and for more than 1,000 years, the pharaohs erected temples, monuments, and sculptures there as evidence of their power and wealth.

The New Kingdom (circa 1550-1070 BC), which many scholars believe was the culmination of the culture and arts of Egyptian civilization, was a particularly prolific period.

Among the archaeological sites on the East Bank of the Nile are two of the largest and most important temples in all of Egypt: Karnak Temple, which the ancient Egyptians called "The Most Chosen Place", and Luxor Temple, known to them as the "Southern Sanctuary".

The complexes were connected by a 2-mile long procession road known as the Ram Road. It is lined with more than 600 statues of ram heads and sphinxes spectacularly carved in stone.

Funerary temples were not just the burial place of the pharaohs; they were commemorated and worshiped forever after their death, along with other Egyptian deities, according to the American Archeology.

Amenhotep III reigned as a pharaoh of Egypt during an unprecedented period often referred to as the Egyptian Golden Age. The pharaoh began an extraordinary building campaign that stimulated urban growth in his capital, Thebes. He ordered the construction of monumental structures such as his mortuary temple, the size of which is only just beginning to be understood as a result of archaeological research over the past two decades.

The "golden" image of Thebes of Amenhotep III was only enhanced by the last chance of discovery of a previously unknown city built during his reign. It is now buried among the ruins of the West Bank.

Some archaeologists consider this city to be one of the most important discoveries of the last century in Egypt. The remains of both the temple and the city now stand as powerful reminders of an era of peace and prosperity.