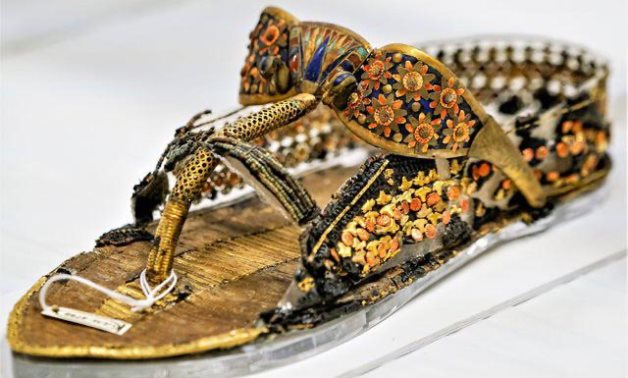 Tutankhamun's sandal made of leather, gold and faience - Reddit

CAIRO – 28 August 2022: Can you believe that young King Tutankhamun had a great collection of footwear?

The astonishing discovery of Tutankhamun's Tomb [KV62] by Howard Carter was one of the most exciting discoveries ever. This discovery made headlines around the world in the 1920s, while Tutankhamun’s golden funerary mask has become an iconic symbol of ancient Egypt.

Recently, experts have conducted an in-depth study of the king's sandals.

The study reveals that the exact number of sandals is unclear. At least 80 samples have been discovered in the virtually intact tomb of King Tut, which were included in order to accompany him into the afterlife. Some have been found in surprisingly good condition, most notably the golden sandals that were discovered on the feet of the mummy of King Tut, according to the ancient-origins website.

André Feldmeier, Dutch archaeologist and author of “Tutankhamun's Shoes: Studies of Ancient Egyptian Shoes”, conducted a study of 81 specimens housed in the Luxor Museum and the Egyptian Museum in Cairo. This was all that was left of the vast collection of shoes that was buried with Tutankhamun. It is a collection that included sewn sandals and beaded sandals. These were a feast for the eyes, made of gold, birch bark, plant fibers, precious stones, and leather.

DNA tests and CT scans of his remains revealed that King Tutankhamun may have had birth defects caused by inbreeding, including club feet and deformities in his feet that would have made him walk limp and required the use of a stick. Three pairs of shoes were found to have horizontal foot straps under the toes that could have been constructed to aid walking. These features are not known in any other shoe or sandal.