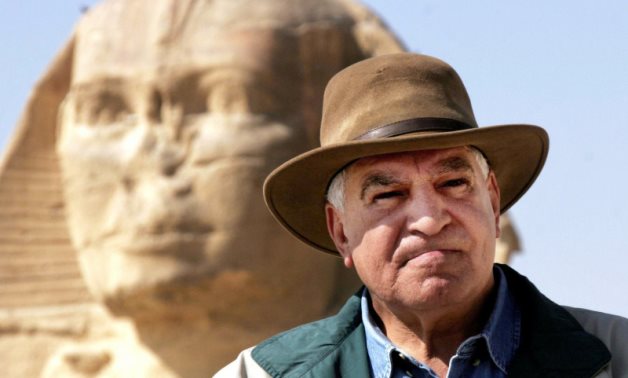 The petition also calls for the repatriation of numerous other Egyptian artifacts currently housed in European museums, including the bust of Queen Nefertiti in Berlin, and a sculpted Zodiac ceiling currently placed at the Louvre Museum in Paris.

Hawass plans to get the petition signed by Egypt’s historians and intellectuals and send it to Europe in October, amid what he believes to be a global wave of re-considering the return of ancient colonial-era artifacts to their home countries.

It is worth mentioning that Egypt will hold an unprecedented celebration of  the centennial of the discovery of King Tutankhamun's Tomb from November 4 to November 7.

The celebration will be held in Luxor as part of a global conference titled "Transcending Eternity: The Centennial Tutankhamun." This comes in a special collaboration with the American Research Center in Egypt.

This formula eventually helped researchers decipher ancient Egyptian hieroglyphs, whose meaning had eluded historians for centuries. But why did ancient scribes include three different types of writing or texts on this iconic stone in the first place?

The reason for the existence of three texts stems from the legacy of one of the generals of Alexander the Great, as the Greek text on the stone is related to the Ptolemaic Dynasty in Egypt founded by Ptolemy I Soter. Soter was a Macedonian Greek-speaking general from the family of Alexander.

Alexander conquered Egypt in 332 BC and Ptolemy I Soter took over the country 9 years later after Alexander's death, while Cleopatra, who died in 30 BC, was the last active female ruler of the Ptolemaic Dynasty.

The Rosetta Stone was revealed by the French expedition in 1799 during the construction of a fort in the town of Rosetta. The stone was not complete. It was a broken part of a larger slab, but although it was missing a large part of the hieroglyphs from the long lost upper section, the stone has the same messages carved into it in ancient Greek writing; Egyptian hieroglyphs, and Egyptian demotic script, which was a connecting script used by the ancient Egyptians between the 7th century BC, and the 5th century AD, according to Britannica.

"The Egyptian Demotic script was the contemporary language used in everyday speech as well as administrative documents," Foy Scalf, head of research archives and research associate at the University of Chicago's Oriental Institute, told Live Science.

By the Ptolemaic period, Middle Egyptian was often used for very formal inscriptions, as Egyptian scribes considered it a classic version of their language whose tradition bestowed authority on the text.

Ancient Greek grew to become widely used in ancient Egypt among the literate class during the Ptolemaic Dynasty. Modern scholars were still trying to understand it at the time of the discovery of the Rosetta Stone. As such, the stone helped researchers decipher Egyptian hieroglyphs and Demotic script, two different scripts of the same language.

The use of hieroglyphs began to disappear after the Romans took over Egypt in 30 BC with the appearance of the last known Egyptian hieroglyphic writing in the fourth century AD, as indicated by Britannica.