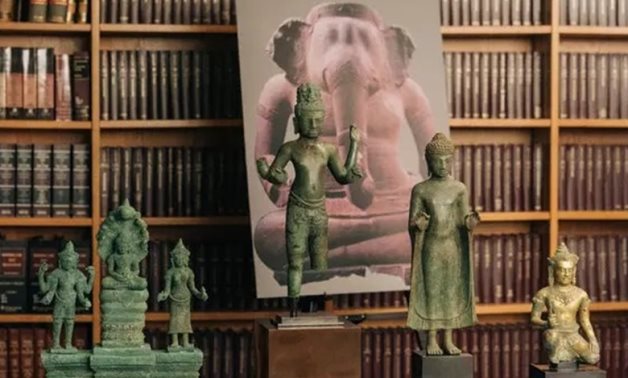 CAIRO – 11 August 2022: A US court has returned to Cambodia 30 pieces of Khmer Empire antiquities that were stolen near the famous Angkor temples and smuggled into the United States.

Among these 30 pieces are Hindu religious sculptures from the 10th century and others from the same period for the deity Ganesh.

The two were stolen from Koh Ker, the ancient Khmer capital, 80 kilometers from the temples of Angkor Wat.

The thirty antiques date back to stages extending from the Bronze Age to the 12th century, according to the American federal judiciary.

According to AFP and WAM 24, it was stolen like thousands of other works at the end of the 20th century, during the wars in Cambodia in the 1970s, and upon the reopening of the country in the 1990s.

The US judiciary recalled that thousands of Khmer statues, sculptures and thresholds were smuggled over decades from Cambodia to antique dealers in Bangkok and Thailand, before being illegally exported to collectors, businessmen and even museums in Asia, Europe and the United States.

The New York State Judiciary has embarked on a massive business recovery process. From the summer of 2020 to the end of 2021, at least 700 items were returned to 14 countries, including Cambodia, India, Pakistan, Egypt, Iraq, Greece and Italy.

The Angkor Wat Temples are a complex of temples located in the Angkor region of Cambodia. It was built by Emperor Suryavarman II at the beginning of the 12th century to be the official temple of the state and its capital. It is now the only temple in the region that remains a center of religious significance since its foundation thanks to the extensive care it received. It was a Hindu temple dedicated to the deity Vishnu, then became a Buddhist temple.

Angkor Wat is an authentic example of Khmer architecture. It has become a symbol of Cambodia appearing on its national flag, besides being the main attraction for visitors to the country.