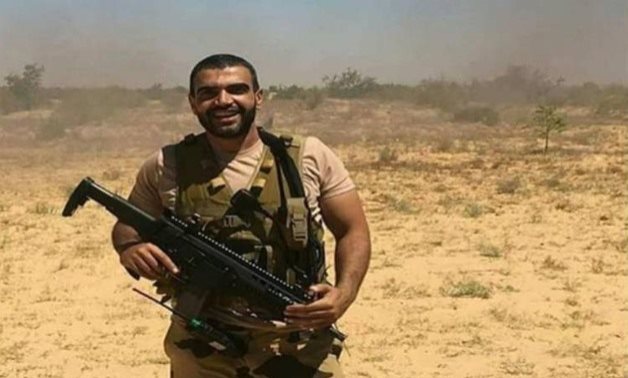 CAIRO – 7 July 2022: Late Commander of Thunderbolt Battalion 103 Colonel Ahmed Mansi was martyred on July 7, 2017 in an attack on an ambush in North Sinai's Al-Barth village located between the border town of Rafah and Sheikh Zowayed town.

The ambush got encircled by 13 armed vehicles carrying 100 takfiris (terrorists who claim others are unbelievers). The outcome of the battle that lasted for hours was the killing of 40 takfiris and the destruction of six vehicles. Yet, 13 officers and soldiers at the ambush martyred, including Colonel Mansi.


The late commander of Thunderbolt Battalion 103, dubbed Mansi the Legend, was born in 1977 in Sharqeya, and graduated from the Military Academy in 1992. He was married, and the father of three.

The martyr's friend told El Watan newspaper that Mansi told him to take care of his family twice. One was before moving to North Sinai in 2013, and the other was when he became the commander of Thunderbolt Battalion 103 after Colonel Rami Hasanein had martyred in 2016.


Balat revealed Mansi had told him he would want to get buried wearing the same overall he put on when he passed away, if he died in combat. He also wanted his family to bury with him a clean overall that he himself prepared two months before the incident.

The lawyer unveiled that the body of Mansi was not damaged by bullets, and that the cause of his death is a bullet that hit a tank so its fragment penetrated the back of his head breaking his skull and causing a wound whose depth was 1.5 cm.


Balat stated that Mansi used to follow news on economics and politics in light of the political momentum that occurred as a result of January 25th Revolution in 2011 and June 30 Revolution in 2013. He added that they used to discuss security and strategic developments, including those happening in North Sinai, and their impact on Egypt.


Widow of Mansi Manar Selim said in a phone-in on a TV program that the clothes and watch put on by Amir Karara, the actor playing Mansi's role in the series, are a copy of the belongings of Mansi but are not his actual belongings.


Selim added that her late husband loved drawing, and that he spent a few weeks at the Fine Arts School before joining the Military Academy. She also revealed that he used to write poetry and was multi-talented.


After his overthrow over mass protests in 2013, terrorism magnified in North Sinai and spread across the country. Later on, terrorism became confined to North Sinai, and the frequency of terror attacks decreased tremendously. Yet, dozens of security personnel martyred and injured.


That is because the Egyptian Armed Forces and the Egyptian Police have been eliminating terrorist hideouts, and illegal secret tunnels that were dug to connect with Gaza Strip with the purpose of smuggling goods, arms, and terrorists.