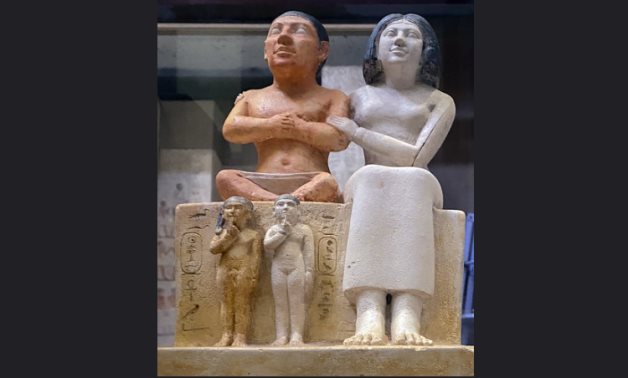 Group statue of Seneb and his family - Flicker/Bruce Allardice

One of these artifacts is a group statue of the ancient Egyptian dwarf Seneb and his family dating back to the late Fifth Dynasty and the beginning of the Sixth Dynasty (23rd century BC). It is placed in the Egyptian Museum in Tahrir.

The group statue was unearthed in a naos in Seneb’s mastaba tomb in Giza. It is the first cemetery to have a dome-shaped roof and circular chambers.

Seneb was one of the most famous Egyptian dwarves, as he held some important positions. He rose from the position of a royal servant to the chief of dwarves in the palace, who was also responsible for managing clothes and ornaments. He assumed the position of head of the royal treasury, and had priestly functions, as he was a priest to King Khufu and Djedefra of the Fourth Dynasty.

Seneb’s statue is considered one of the most important statues that express the closeness of social classes. The group statue also depicts his wife Senetites, a woman of normal height from the royal house, laying her hand on his shoulder affectionately. The group statue depicts her wearing a long-sleeved cloak and a wig that shows her real hair underneath.

The statue shows Seneb sitting cross-legged with wide eyes, showing a slight smile on his face and black hair on his head. It is clear from the size of his large head that he was a man of great wisdom and intellect. Additionally, the statue depicts his son and daughter standing before his feet.

The remarkable ancient Egyptian artist placed the couple’s two children where Seneb’s legs would have been if he were the same height as his wife. The children are depicted naked with their index finger in their mouth.