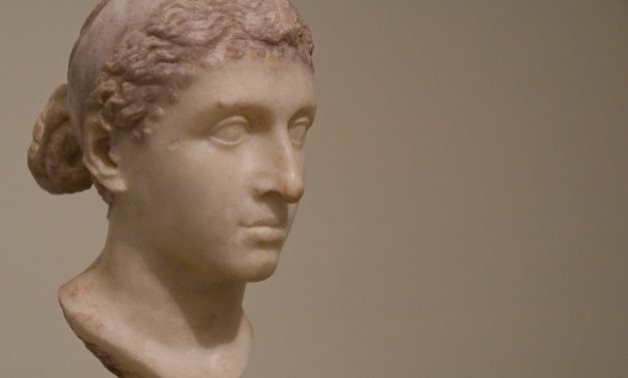 CAIRO – 17 May 2022: Cleopatra VII (69-30 BC) was the Queen of Egypt. Cleopatra VII was portrayed as the most powerful woman who took advantage of her position.

Cleopatra VII had suffered from historical accounts that distorted her credibility, reduced her successes and greatly exaggerated in describing her flaws.

The common view of Cleopatra VII that was presented in the ancient Roman text and spread in the modern media is that she used her beauty to gain political power. What these ancient accounts do not mention is that she was, in fact, one of the greatest thinkers of her time.

She was educated by the great scholars of the Hellenistic world and studied in Alexandria which housed the famous ancient Library of Alexandria. There she studied geography, history, astronomy, philosophy, international diplomacy, mathematics, chemistry, medicine, zoology, and economics.

Cleopatra VII was the only member of her dynasty who spoke the ancient Egyptian language and read hieroglyphs. Apart from this, she knew ancient Greek, the languages of the Parthians, Jews, Medes, Syrians, Ethiopians, and Arabs.

It is known that Cleopatra VII spent a lot of time in some kind of ancient laboratory. She conducted research on herbs and cosmetics. Unfortunately, all the books she wrote were lost in a fire in AD 391, when the great Library of Alexandria was destroyed.

The famous physician Galen studied her work and was able to rewrite some of the formulas she created, among which was a special cream that helps men restore their hair.

After Cleopatra VII’s death, Egypt cut off all political ties with the Roman Empire, marking the end of the second to last Hellenistic state.