CAIRO – 16 May 2022: Ancient Egypt is famous for its mummification practices.

Among the significant discovered mummies are the six Gebelein mummies that are distinct for being natural mummies from the late Predynastic period, about 3400 BC.

Artificial preservation of the dead was practiced on a large scale in Egypt only from about 2600-2100 BC, during the Late Old Kingdom period. However, some new evidence emerged indicating the use of resins and linen wrappers to preserve dead bodies since 3500 BC.

The Egyptian natural mummy technique involved drying the corpse in the hot sun on a sandy base until it was completely free of moisture. Direct contact with hot dry sand naturally dries and preserves corpses, including the mummy of the Gebelein man discovered in ancient Thebes, according to the ancient-origins website.

The Gebelein man was wrapped in a mat and buried in a shrunken, semi-embryonic position that was common in burials in Egypt until the Late Kingdom, when the burial of bodies began to be complete. Perhaps religious reasons were behind this change, but it is also possible that the development of artificial embalming forced it, as the extended position made mummification easier.

The mummy of the Gebelein man was the first pre-dynastic mummy to be displayed in the first Egyptian room in the British Museum. In fact, the only other mummy of Gebelein that is occasionally shown to the public is the only female in the group. 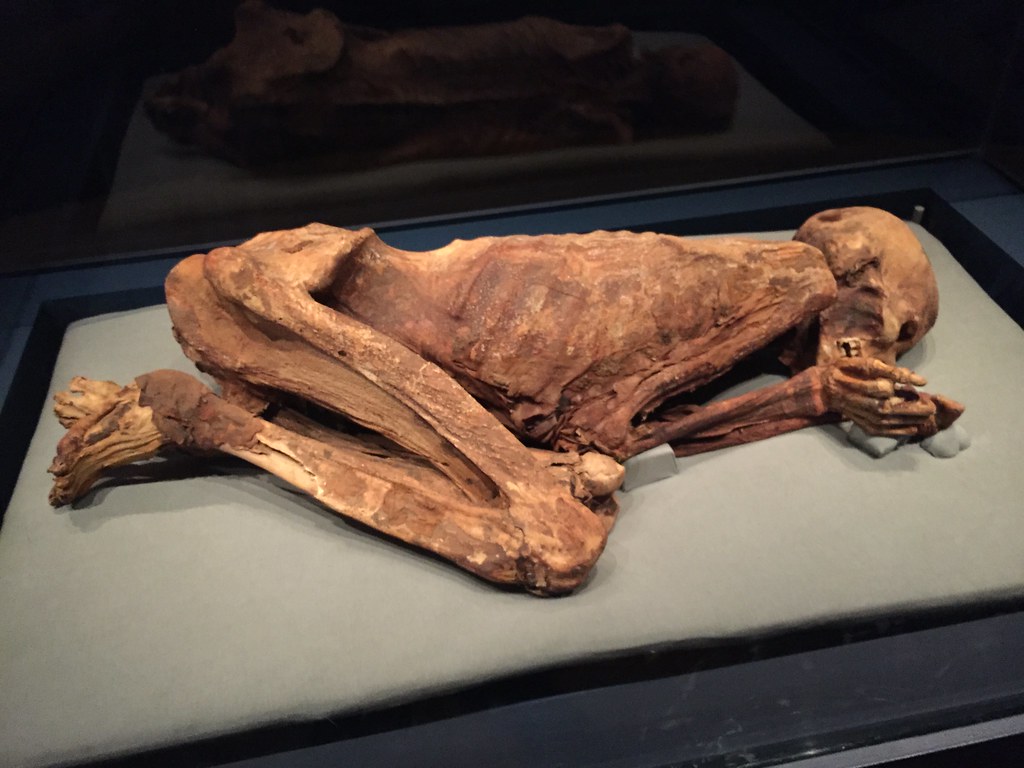 The corpse of the Gebelein man was remarkably well preserved. Not only did his facial features and hair appear, but it was also possible to see a wound on the surface of his skin under his left shoulder blade. After more than a hundred years its ominous significance was understood.

Advances in the 21st-century forensic technology have brought the next big breakthrough in understanding how the mountain man lived, and died. The Gebelein man, rarely transported since it was first shown in 1901, was carefully carried on a quilt and transported in a van to nearby Bupa Cromwell Hospital. There, he underwent high-resolution scans. Only 30 seconds of scans yielded enough data to take a detailed look at his interior. The data was then examined using a hypothetical autopsy table. This technology, from Sweden, allows rotation, enlargement and transverse cutting of the skin.

“There is a wound on the surface of his skin, which people have been able to see for the past hundred years, but only by looking inside his body.  I realized his shoulder was damaged and the rib under the shoulder blade was damaged. All this points to a violent death, in short he died by murder,” said Curator of Physical Anthropology Daniel Antoine.

Scans of the skeleton of the Gebelein man revealed that he was a young, muscular man aged between 18-21 years at the time of death. Scanning of his shoulder wound showed that it was a wound that penetrated his left shoulder and ribs to the left lung perforation. The wound is believed to be fatal because it was so severe there was no sign of healing around the muscles and bones. The skeleton bore no defensive injuries, leading investigators to conclude that he was surprised and died quickly. Thus, he was probably killed by a fatal stab in the back.

The killing weapon could have been a pointed object and most likely a copper or silver dagger. Copper and silver blades 6-6.5 inches (15-16.5 cm) long and 1.5-2 inches (4-5 cm) wide were common in Egypt at the time of his death. Almost the entire length of this blade was pushed into his back in the attack that caused his death.

But this is not the end of the story. The Gebelein man had other surprises for the researchers, when the bodies of the Gebelein man and woman were re-examined as part of a conservation program in 2018. Faint smudges were discovered on their arms, which were hitherto thought to be insignificant. Under infrared radiation it appeared as a tattoo. This delayed the oldest evidence of this practice in Africa by a thousand years.

Furthermore, the Gebelein man's tattoo was pictorial, representing two animals slightly overlapping, believed to be a wild bull with a long tail and magnificent horns and a sheep with arched horns and humped shoulders. The Gebelein woman's tattoos were more abstract and difficult to interpret.

To date, the only evidence of tattoos from pre-dynastic Egypt came from abstract tattoos engraved on female statues. This led archaeologists to believe that women's tattoos were practiced as part of fertility rites at this time.