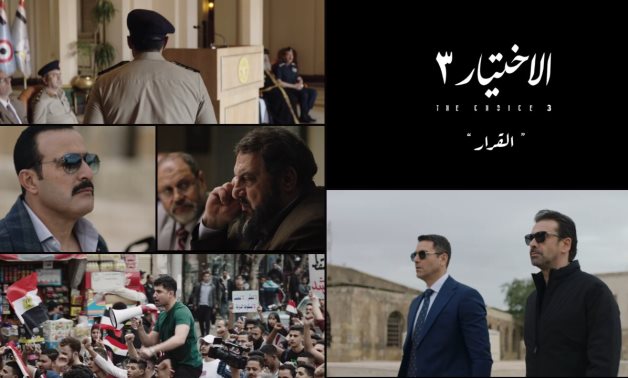 CAIRO – 3 April 2021: Members of the House of Representatives praised Al-Ekhteyar 3 (the choice) series that shows the Egyptian people behind the scenes of events in 2012-2013, a turning point in the fate of Egypt and the region.

MP Alaa Abed described the series as “patriotic,” and tells of events that would have led to a civil war but for the “will of the Egyptian people,” referring to the turmoil during the one-year rule of the Muslim Brotherhood and their ouster after massive protests nationwide.

Abed said Al-Ekhteyar reveals conspiracies that were   being hatched against the country internally and beyond, and how the Egyptian people were united against the Brotherhood that manipulated the circumstances of the country to take over office and withdraw the freedom of citizens.

He added that the series of three parts is exemplary “soft power” that uncovered the “real face” of the Muslim Brotherhood.

MP Ghada Agamy applauded the choice of actors who portray the prominent figures that represented that stage in history, especially Yasser Galal, who playes Abdel Fattah al-Sisi when he was a defense minister.

Al-Ekhteyar promoted patriotism amongst the Egyptians, Agamy said, adding that more similar series should be produced to expose terrorism and focus on the sacrifices of the army and police to maintain security.

MP Olfat al-Manzalawy said Al-Ekhteyar has become a brand for Ramadan and one of the most popular dramas that correct misconceptions amongst the audience. The series documents the events and discloses truths, Manzalawy said.

She emphasizes how the series gathers family members to watch patriotic drama, proving that Egyptians want patriotism instilled inside their children.

MP Gihan al-Bayoumi said the three parts of the series also raises awareness amongst those who witnessed the events but do not know many of the details as well as those who were too young to comprehend the politics.

The series shows top Brotherhood members following protests against their organization and planning counter protests in Rabaa al-Adaweya and Nahda squares, which would later turn into long, armed sit-ins.

It also shows how Sisi meets with top state figures to release the July 3 statement that called on now-late President Mohamed Morsi to listen to the public and resign.