Was King Tutankhamun's dagger made of materials that came from space? 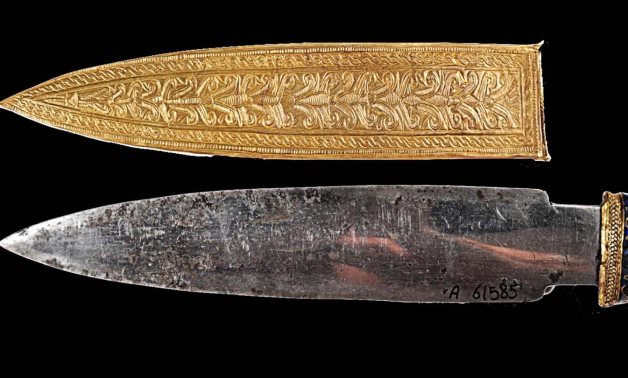 CAIRO – 3 March 2022: A recent study published in the American Journal of Meteoritics and Planetary Sciences stated that the secret behind the mysterious dagger of King Tutankhamun, which remained rust-free despite being made of iron, is that the materials used in making the dagger may have come from outer space, from a meteorite that hit the earth while the king lived.

King Tutankhamun's dagger was discovered with his mummy. Archaeologists determined that the dagger, which will be displayed in the Grand Egyptian Museum, is one of the most important treasures to ever be found. The dagger was re-analyzed to prove that Tutankhamun was actually a warrior.

The dagger is made of iron. In the era of Tutankhamun, iron was rarer than gold, so where did iron come from? This question has baffled scientists and experts.

After conducting a scientific analysis, the proportions of the elements from which the dagger was made were determined. It was discovered that the proportion of nickel within the dagger is abnormally high. Nothing was found on Earth that matches the dagger’s elements, so it was decided that the dagger's iron came from the meteorite.

In 2016, a scientific study determined that Tutankhamun’s dagger is made of iron, containing approximately 11 percent of nickel and traces of cobalt. This is characteristic of extraterrestrial iron, and as a result the artifacts contained high levels of nickel or cobalt.

In 2017, France presented new research on ancient Egyptian tools made of rare iron during the Bronze Age period, such as the ax, jewelry, and others. The study showed that the iron used in the manufacture of these tools came from outer space and reached Earth.

The result of the presented research also confirmed that a few ancient craftsmen during the Bronze Age, in the ancient Near East, knew how to make iron by smelting it from the earth's crust.

French researcher Albert Gambon, a mineralogist and professor at the University of Pierre and Marie Curie in Paris, explained that Bronze Age metalworkers sought to obtain meteorites to make these artifacts as treasures, according to live science.