Antony and Cleopatra: The most famous love story that began in Egypt’s Alexandria 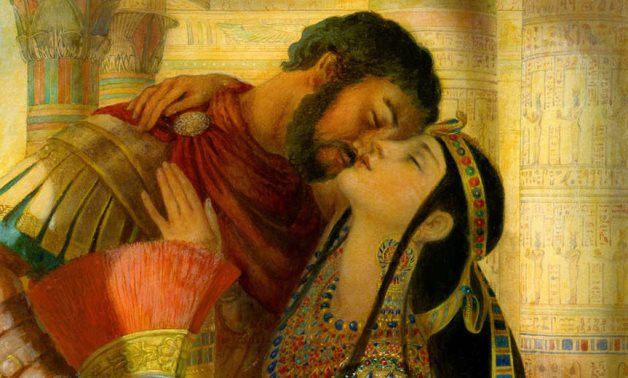 CAIRO – 14 February 2022:  Antony and Cleopatra lived a love story in Alexandria that began when Mark Antony, one of the Roman rulers' partners, used Cleopatra in his war against the Parthians.

In 40 BC, Cleopatra gave birth to twins, whom she named Alexander Helios and Cleopatra Selene.

Antony had already left Alexandria to return to Italy, where he was forced to conclude an interim settlement with Octavian. As part of this settlement, he married Octavian's sister Fulvia 3 years later. However, Antony was convinced that he and Octavian could not come to an understanding and returned to the East where he reunited with Cleopatra.

Moreover, Antony needed Cleopatra's financial support for his deferred campaign against the Parthians. In return, Cleopatra demanded to retrieve a large part of the eastern empire of Egypt, including large parts of Syria and Lebanon and even the rich balsam groves of Jericho.

In 34 BC, Antony celebrated a triumphant return to Alexandria, which was followed by a celebration known as the "Alexandria Donations." Crowds flocked to the gymnasium to see Cleopatra and Antonio sitting on golden thrones placed on a silver platform, with their children sitting on slightly lower thrones next to them, according to Encyclopedia Britannica.

Furthermore, Antony declared Caesarion the son of Caesar, Cleopatra was hailed as Queen of Kings, and Caesarion as King of Kings. Alexander Helios was granted Armenia and the lands beyond the Euphrates, and his infant brother Ptolemy the lands to the west of it. The boys' sister, Cleopatra Selene, was to be ruler of Cyrene and it was clear to Octavian, watching from Rome, that Antony intended his extended family to rule the civilized world. Rumors soon spread that Antony also intended to move the capital from Rome to Alexandria.

Antony and Cleopatra spent the winter of 32-31 BC in Greece. The Roman Senate, however, deprived Antony of his prospective consulate for the following year, and then declared war against Cleopatra.

Cleopatra retired to her grave when Antony went to fight his last battle, and receiving the false news that Cleopatra was dead, Antony fell on his sword. In a final scene of devotion, he carried himself to Cleopatra's sanctuary and died there, having asked for peace with Octavian.