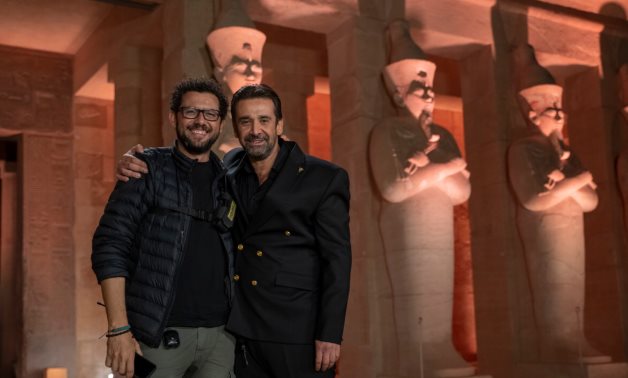 While the entire world watched the grand opening of the Avenue of Sphinxes  in Luxor, a hard working crew is carried on its efforts to bring about an achievement as spectacular as the Pharaohs' Golden Parade that managed to attract the whole world's attention back then.

Among this crew is Ahmad Al Morsy, who is  the DOP and director of the whole epic event.

In April 2021, Al Morsy took part in the Pharaoh’s Golden Parade as a director and DOP of the event that witnessed the relocation of 22 royal mummies from the Egyptian Museum in Tahrir to the National Museum of Egyptian Civilisation (NMEC) in Fustat. The unique event went viral, where millions around the world followed it through the different social media platforms . He also directed the megastar Mohamed Mounir’s music video Ana Masry ( I Am Egyptian), which was released during the event.

In collaboration with Egypt’s Ministry of Tourism and Antiquities, Al Morsy previously directed Experience Egypt: Same Great Feelings TV commercial – Ad, featuring Egypt's most attractive touristic spots with the revival of tourism in the summer of 2020. The commercial won him the Gold Award in the Corporate Branding and Advertising Category from the Australian Cinematographers Society (ACS). He then worked on Experience Egypt: Summer in Egypt is a Different Story TV commercial- Ad, which aired in June, 2021, the beginning of the summer tourism season in Egypt.

For more than 20 years, Ahmad Al Morsy has been working in the filmmaking industry making more than 50 films and over 2000 TV ads as a DOP, and recently as a director. Throughout his career, Al Morsy won 22 national and international awards for his work. Currently, Al Morsy is a member of the Canadian Society of Cinematographers (CSC), in addition to the Australian Cinematographers Society (ACS) that granted him a total of 9 awards, since joining it in 2018.

As a DOP, Al Morsy has under his belt a number of works, including Messages from the Sea (Rasa'el Al Bahr) (2010), Egypt's official submission to the Academy Award for Best Foreign Language Film, and for which he received 3 awards. Moreover, his film Aswar Al Amar (Walls of the Moon) is the second film in the world to be shot using an ARRI D21 camera in 2009, where Al Morsy mixed between using digital cameras and 35 mm films. In 2014, he worked on The Blue Elephant, which shattered previous records at the Egyptian box office that year. The film marks his first collaboration with director Marwan Hamed and writer Ahmed Mourad, which was repeated in The Originals (2017) that won him 5 awards, including 3 awards from the Australian Cinematographers Society (ACS), and continued with Diamond Dust (2018), followed by Blue Elephant: Dark Whispers (2019), which became the highest-grossing film in the history of Egyptian cinema, and finally the upcoming film Kira & El Gin.

His latest works as a DOP also include Al Aref: Awdat Younis that dominated the Egyptian box office in 2021, and for which Al Morsy received a fair share of critical acclaim for introducing unprecedented forms of actions to the Egyptian film industry.

Furthermore, Al Morsy was the DOP behind Vodafone’s commercial for Ramadan 2021 ‘Together we can’, marking artist Sharihan’s comeback to the screen after a 27-year hiatus. Through using uncommon visuals, Al Morsy could convey the pain the great artist went through in her life. He was also the DOP for her musical play Coco Chanel, which premiered on Shahid.net in July, 2021.