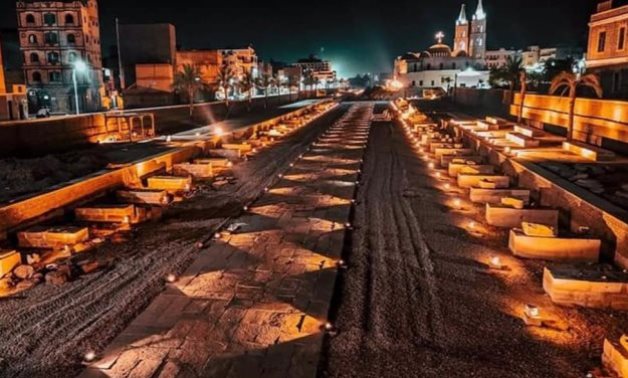 CAIRO – 23 November 2021: Archaeological expert Ahmed Amer, who specializes in Egyptology, said that the King’s Festivities Road, wrongly known as the "Rams Road", dates back to 5,000 years ago. The road was built for the purpose of witnessing the annual celebrations of the Opet Festival, feasts and special occasions, as well as the coronation of kings, with processions that extended from Karnak Temples to Luxor Temple.

The King’s Festivities Road hosts statues of the Great Sphinx or rams along its length of 2,700 meters from the Luxor Temple to Karnak Temples. In the Pharaonic eras, the number of rams in the two rows was 1,300 rams, but currently there are only about 300 of the original rams. The rest of the rams were destroyed in the eras that followed the Pharaonic era. However, the largest share of the road’s implementation was completed during the reign of King Nectanebo I, founder of the 30th Dynasty.

It is worth mentioning that the appearance of the ram as a sacred animal dates back to the prehistoric times. It started in the form of rocky chapels inscribed with the shape of a ram.

Rams in the road symbolize the god Amun that represents fertility of the ancient Egyptians, and the Ancient Egyptians called it "Wat-nTr", meaning the Path of God. These statues were carved from a single block of sandstone with a cornice inscribed with the king's name and titles.

The ancient Egyptians also believed that the deity Amun moved to the headquarters of his harem for mating and fertility; then nourishment and prosperity prevailed in Egypt.

Amer further explained that the ancient Egyptians attached great importance to the Opet Festival, which was held annually in Thebes [Luxor currently] during the era of the New Kingdom and beyond, precisely during the second month of the season of Akhet, the flooding season of the Nile. During the festival, the statues of the deities of the Holy Trinity of Thebes: Amun, Mot and Khonsu, were escorted out of sight inside their sacred boats in a large ceremonial procession from the Temple of Amun in Karnak to the Temple of Luxor on a journey that extended for more than 2 km.

In this ritual, the meeting of Amun-Ra and his wife Mot is highlighted, and the renewal of birth is the main theme in the celebration of Opet. The main source for the Opet Festival is the eastern and western walls in the great colonnade of the Luxor Temple. They date back to the reign of King Tutankhamun. The two walls explain the details of the celebration of the Opet Festival.

In addition, some inscriptions were found in the Temple of Khonsu in the Karnak Temples area. This is in addition to the scenes recorded by the artists of Queen Hatshepsut in the red cabin of the Karnak temples. Some drawings of the festivities can also be seen in the Ramesseum Temple in Edfu, the Temple of Medinet Habu, and the graves of the nobles on the western mainland.

Furthermore, the celebration was documented in the pillared hall of Luxor Temple, which was built by King Amenhotep III during the Opet celebrations.

The archaeological expert added that the reopening of the Rams Road will make the city of Luxor go global and turn it into an international tourist attraction.